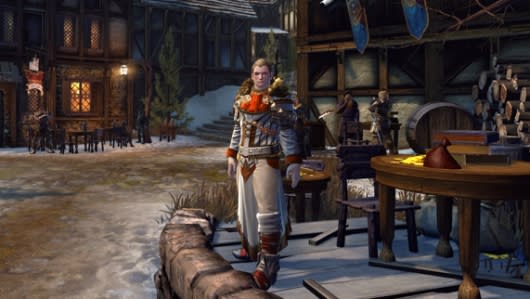 When Icewind Dale arrives with Neverwinter's Module 3, players will have a difficult decision to make: whether to join up with the Ten-Towners or the Arcane Brotherhood.

In a new post, Cryptic explains that these two groups are at conflict with each other in the effort to collect the precious Black Ice. Ten-Towners want the Ice for profit and for those who have lived in the north, while the Arcane Brotherhood desires the substance to increase its members' knowledge. Once a group is chosen, that faction will deliver daily contracts that the player can take up. By repeating the dailies, players can earn enough Black Ice to create a new armor set. Players shouldn't fret too much about their choice, as their allegiance can change on a daily basis with no penalty.

Cryptic will also be introducing account shared banks with the module to help pass items between characters with ease. Module 3 arrives on May 13th.
In this article: account-bank, action-mmo, arcane-brotherhood, bank, cryptic, cryptic-studios, dev-blog, dev-diary, dnd, f2p, fantasy, free-to-play, icewind-dale, mercenary-contracts, module-3, neverwinter, patch, patch-preview, perfect-world, perfect-world-entertainment, preview, pwe, shared-account-bank, ten-towners
All products recommended by Engadget are selected by our editorial team, independent of our parent company. Some of our stories include affiliate links. If you buy something through one of these links, we may earn an affiliate commission.