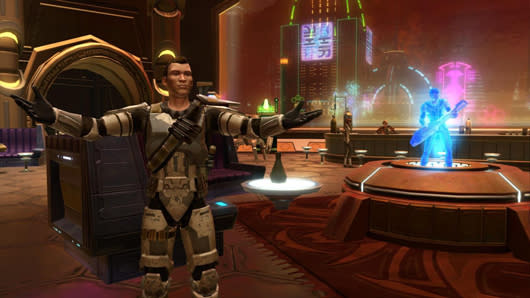 He states that for GS to truly feel like an expansion, "it needs to include the full set of features including those originally coming later in the year." As such, BioWare is delaying the start of subscriber early access from June 24th to August 19th. Maclean says the additional time will allow the devs to add conquest events, expanded guild flagship functionality, the Tatooine Homestead stronghold, and the ability to place vehicles, mounts, pets, and companions as player housing decorations.

BioWare has also moved the deadline date for subscribers who are looking to get early access rewards. It's now July 15th instead of May 11th, meaning that you'll need to sub up by the former date if you want the Nar Shaddaa Sky Palace with three additional rooms and the other promised goodies. After the August 19th subscriber early access period, preferred early access and the official launch will follow in September and October.

[Thanks ninjonxb!]
In this article: bioware, bruce-maclean, delay, ea, electronic-arts, f2p, free-to-play, galactic-strongholds, galactic-strongholds-delay, lucasarts, sci-fi, star-wars, star-wars-the-old-republic, swtor, swtor-delay, the-old-republic, tor
All products recommended by Engadget are selected by our editorial team, independent of our parent company. Some of our stories include affiliate links. If you buy something through one of these links, we may earn an affiliate commission.