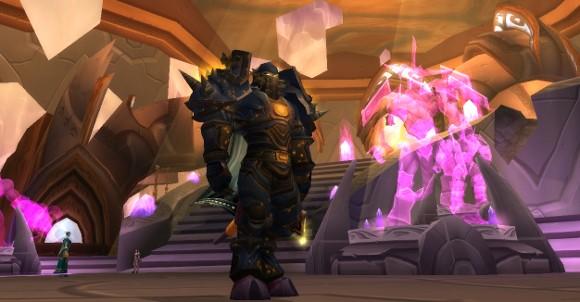 Yep, another one there's no art for. Enjoy this picture of some random draenei instead.

Who was Restalaan and why should you care? I'm glad you asked. Restalaan was the closest thing Velen had to a buddy - a close friend and confidant, a right hand who led the defense of the draenei city of Telmor. Having been with the prophet since the exodus from Argus, Restalaan was technically an ancient eredar, born during the time when Velen, Kil'jaeden and Archimonde were the triumvirate and led all eredar before the coming of Sargeras.

Restalaan was always there, serving as Velen's sounding board and anchor. In the history outlined in Rise of the Horde it was Restalaan who led the patrol that saved Durotan and Orgrim Doomhammer when they were children - an event that should still have happened in the Warlords of Draenor timeline, since both Durotan and Doomhammer are confirmed to be alive. In the original timeline, Restalaan would come to have reason to regret this decision, since in the process of saving the two young orcs and leading them to Telmor to meet with the prophet he exposed Durotan to the use of the Ata'mal fragment Leafshadow. This enabled Durotan to later expose Telmor to the Horde, which destroyed the city - Durotan killed Restalaan during the battle. So died Restalaan, captain of the guard of Telmore, Velen's best friend, survivor of the exodus from Argus - killed by the boy who's life he saved.

But that fate is not set on the Draenor of Warlords.

It should be noted that Restalaan had actually spared Durotan's life once before the battle in Telmor - Restalaan defeated the Frostwolf chieftain and a squad of his Frostwolves in battle, but spared Durotan's life because the Frostwolf had allowed Velen to leave alive from a failed attempt to mediate peace. Had he not done so, Telmor would never have fallen. But Restalaan was loyal to Velen's vision, having stood stalwartly at the right hand of the prophet for so many years and so many lost worlds, so many retreats - to Restalaan life was ultimately less important than his principles.

Still, with certain potential spoilers in mind (which I won't go into here - you can look them up if you're that interested) I find the idea of seeing Restalaan on Draenor a fascinating possibility. His entire life and his death would be completely changed - the context of his existence, his purpose in his long, long service to the prophet and his people would undergo a sea change.

Furthermore, Restalaan's life was tied up in Telmor, a city hidden behind a magical illusion, and that's just cool to me. I want very much to see Telmor, to see what Talador and the draenei settlements in Nagrand were like. Considering that Telmor was close to Frostwolf territory in the novels, it could have been in several possible locations - it could be in Nagrand, it could be to the north of Talador near Frostfire Ridge, or it could be to the south near Auchindoun and the Nagrand border. How would Restalaan relate to the rise of the Iron Horde? Considering this time it seems that Durotan isn't a part of the war machine threatening Telmor and the draenei as a whole, does this mean a potential rapport with the orc who owes Restalaan his life? And what about Orgrim Doomhammer, a Blackrock orc who we've heard little about so far? Perhaps in this timeline it's Doomhammer who invades Telmor.

Without going into the spoilers I mentioned above, I can say that I would love to see Restalaan bounce off of other figures (Y'rel, Maraad, Akama) that we know we're going to see in Warlords. This is a draenei who completely bought into Velen's worldview and never wavered from it, yet who also served as the prophet's grounding, a friend who could tell Velen when he was getting detached or missing the here and now. His loss left the draenei without anyone to perform that role for the prophet, and I think it's a shame that he was repaid for being merciful with death.

I'm definitely hopeful we'll get to see Restalaan and his beloved Telmor in Warlords of Draenor. And I'm definitely curious to see what his reaction will be to the arrival of strange new draenei - after all, he's a survivor of Argus, he's been around for so long and seen so much its kind of hard to believe he'd be easily fazed.

In this article: Akama, Leafshadow, lore, Maraad, Nagrand, Restalaan, Talador, telmor, Velen, warlords-of-draenor, Yrel
All products recommended by Engadget are selected by our editorial team, independent of our parent company. Some of our stories include affiliate links. If you buy something through one of these links, we may earn an affiliate commission.