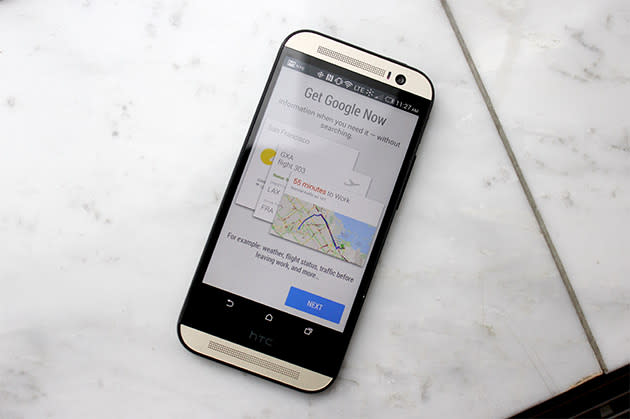 Well, can't say we saw this one coming -- rather than dig into the complexities of an HD Voice rollout, Sprint CEO Dan Hesse confirmed that the carrier, HTC and the folks at Harman/Kardon have created a special Harman Kardon version of the HTC One M8. Why? Apparently because the way most other smartphones play music leaves much to be desired.

No one has waved around one of these things yet, but that's OK. All of the magic happens in software anyway (although it has "champagne" trim and a darker back to let everyone know how much more premium it is). The star of the show is a software feature called Clari-fi -- while it's easy to look at it as the successor to Beats Audio, it sounds a lot more substantial than a glorified audio profile. To hear Harmon Kardon tell it, Clari-fi leans heavily on algorithms that analyze music and aim to restore the complexity of sound lost in the production process. The tweaked M8 can also play 24-bit, 192kHz lossless .FLAC files -- that probably won't mean much unless you're a dyed-in-the-wool audio buff, but it'll sound good enough to make you rethink the CD archive taking up space in the garage.

At this point, it's anyone's guess as to how good the end result actually sounds, but you won't have to wait long to find out. The special edition M8 will hit Sprint stores (with a pair of Harman Kardon headphones in the box) for $229 with a contract on May 9. 6
In this article: android, Clari-fi, harmankardon, htc, htcone, htconem8, m8, mobilepostcross, one, phone, sprint
All products recommended by Engadget are selected by our editorial team, independent of our parent company. Some of our stories include affiliate links. If you buy something through one of these links, we may earn an affiliate commission.