Why following Apple stock is not for the faint of heart

How iPhone launches affect the price of Apple stock

Icahn reportedly invested over $1.5 billion in Apple, stake in company still less than 1% 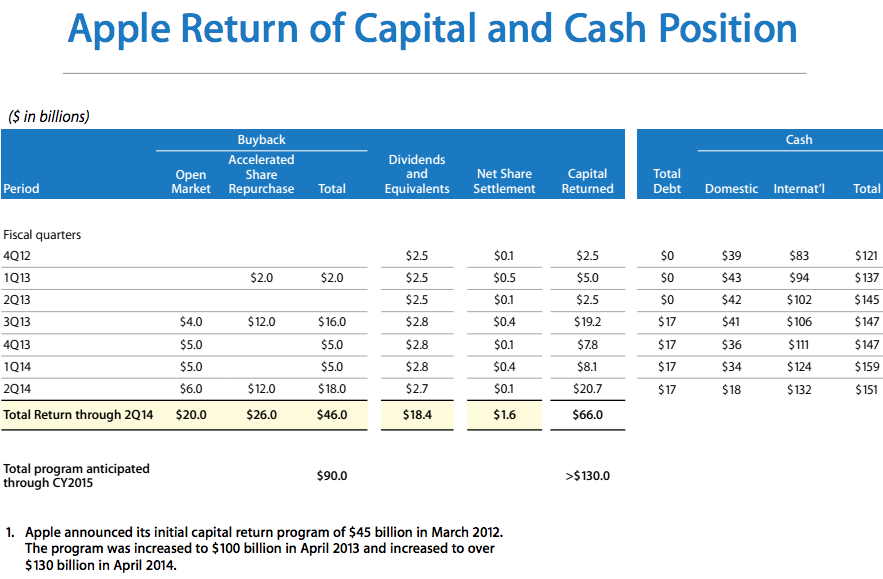 Since March of 2012, Apple has nearly tripled its capital return program. What started out as a US$45 billion effort to return value to shareholders has now skyrocketed to a $130 billion program.

In conjunction with Apple's increased capital return program, the company recently made available the above chart which maps out a timeline of its dividend payouts and stock buybacks. The chart is worth highlighting because it really illustrates the magnitude of just how much money Apple is spending.

And yes, Apple may be issuing debt to fund the operation, but it's not as if it's doing so because it doesn't have the cash on hand. On the contrary, Apple today has $151 billion in the bank. The only hiccup is that the bulk of that cash is overseas, meaning that if Apple repatriated that amount back to the U.S, it'd be subject to a high corporate income tax rate. So from Apple's perspective, it's more economical for them to issue debt with an extremely low interest rate than it is for them to bring over their cash hoard abroad.

Also worth mentioning is that Apple is one of the largest dividend payers on the planet. Since reinstating dividends back in March of 2012, Apple has cumulatively doled out $23.44 per share to shareholders. By way of contrast, Microsoft -- which is no stranger to having huge stockpiles of cash -- has paid out $1.96 per share in dividends during the same time period.

In this article: apple stock, Dividends, finance, Stock buybacks
All products recommended by Engadget are selected by our editorial team, independent of our parent company. Some of our stories include affiliate links. If you buy something through one of these links, we may earn an affiliate commission.