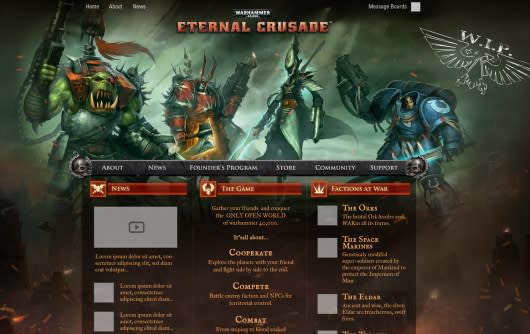 Behavior Associate Producer Mathieu Fecteau penned a new producer's letter today in which he showed off both a mock-up of the upcoming Warhammer 40,000: Eternal Crusade website and some concept art of the founder's program heroes.

The website will be launched in the early summer, Fectaeu said. "I'm really proud of the direction the design is taking. Ghislain Barbe (Art Director) helped by Nicolas Brunoni (Lead UI/HUD) and I are working closely with Turbulent to get something immersive, dynamic and appealing for our dear crusaders!"

As for the founder's program heroes, the sketches provided in the producer's letter merely give an idea of what they will look like when comleted. Fecteau said that all factions will have heroes, special units that are sent out for certain situations, but are "mostly aesthetic."
In this article: action-mmorpg, behaviour, behaviour-interactive, eternal-crusade, founders-program, Ghislain-Barbe, Mathieu-Fecteau, Nicolas-Brunoni, producers-letter, warhamer-40k, warhammer, warhammer-40k-eternal-crusade, warhammer-eternal-crusade, website
All products recommended by Engadget are selected by our editorial team, independent of our parent company. Some of our stories include affiliate links. If you buy something through one of these links, we may earn an affiliate commission.