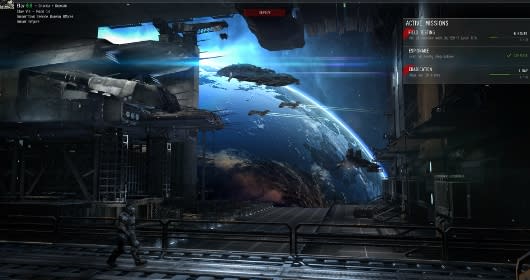 One of the main complaints about DUST 514 since its announcement was the fact that the game was a PlayStation 3 exclusive. DUST was CCP's first attempt to break into the massive console shooter market and its first game to use the free-to-play business model, but things didn't exactly go to plan. The millions of console gamers CCP expected to flood into New Eden failed to materialise, reviews were mixed at best, and DUST quietly fell off the console radar. Players have been asking for a PC release ever since, as the game's unique connection with the EVE Online universe could potentially make it popular with existing EVE players.

If you've been hoping for DUST on the PC, your prayers may have just been answered. A few hours ago at EVE Fanfest 2014, CCP demonstrated a prototype of something it calls Project Legion -- an attempt to bring DUST 514's shooter gameplay to the PC but with all-new sandbox gameplay. The project is extremely early in development, but CCP was able to put together a concept demo for Fanfest attendees showing how the game will work. Most of the demo was a slick UI and transition into a DUST planetary environment which has had its graphics significantly improved. DUST 514 is severely limited by the specs of the PS3, so Legion's being on PC means it should actually still look that good when deployed.

In addition to signing up for mercenary contracts, players will be able to scan the entire EVE universe for open sandbox salvage zones where resources have been found. These planets have no pre-defined missions, victory conditions, or teams; instead, they're free-for-all PvE zones with open-world PvP, and CCP hopes that this will promote the same kind of emergent gameplay as is seen in EVE. It won't be a true sandbox until you can stab someone in the back, CCP announced to a pleased audience. Little else is known about the project, and the announcement has raised some pretty big questions. Will Legion link in with the EVE universe in any way like DUST? And what will happen to DUST 514 on PS3 if Legion takes off?

Whether you're a die-hard fan of internet spaceships or just a gawker on the sidelines, EVE Fanfest is the EVE Online event of the year (and the key source of new DUST 514 and EVE Valkyrie scoops!). Follow Massively's Brendan Drain as he reports back on this year's Fanfest starpower, scheming, and spoilers from exotic Reykjavik, Iceland.
In this article: breaking, console, dust-514, dust-514-pc, eve, eve-fanfest, eve-fanfest-2014, eve-online, eve-online-fanfest, eve-online-fanfest-2014, event, event-coverage, fanfest, iceland, legion, massively-event-coverage, pc, pc-release, playstation-3, project-legion, ps3, pve, pvp, reykjavik
All products recommended by Engadget are selected by our editorial team, independent of our parent company. Some of our stories include affiliate links. If you buy something through one of these links, we may earn an affiliate commission.