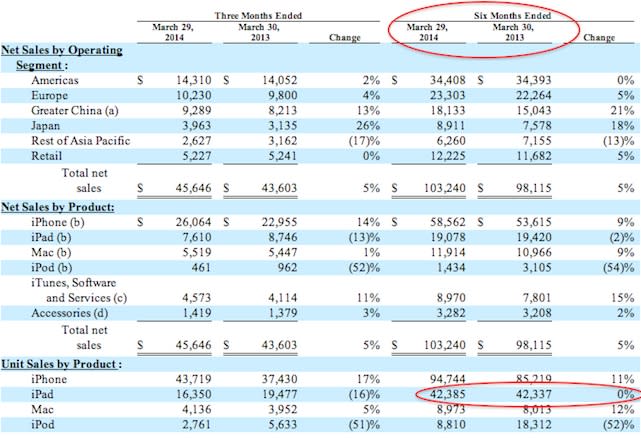 Not to beat a dead horse, but when analysts and pundits jump on a quarterly decrease in iPad sales and quickly proclaim that the iPad may have peaked, it's worth pointing out the logical flaws in such determinations.

The mind-boggling thing is that this data is easily accessible, yet is not often cited by websites that are, for whatever reason, so keen on pushing the "iPad is fading" narrative. As a quick example, look no further than this Business Insider piece titled, "Apple's iPad Business Is Collapsing."

The reality, and the numbers back this up, is that iPad sales aren't decreasing. There's no imminent collapse. What's really at play here is that during the first quarter of 2013, Apple sold an unusually high number of iPads on account of a severe iPad mini backlog that accumulated during the previous quarter. So when Apple's iPad sales figures came out for the first quarter of 2014, the numbers were naturally lower. But again, if we look at the data with a six month lens, iPad sales actually went up just a tad.

Looking ahead, if iPad sales across 2014 come in lower than iPad sales in 2013, then sure, we can talk about how the iPad train has come to a halt. But until then, all of the gloom and doom stories about the vibrancy of the iPad are premature at best, and purposefully misleading and hyperbolic at worst.

In this article: apple, apple financial, ipad, opinion
All products recommended by Engadget are selected by our editorial team, independent of our parent company. Some of our stories include affiliate links. If you buy something through one of these links, we may earn an affiliate commission.