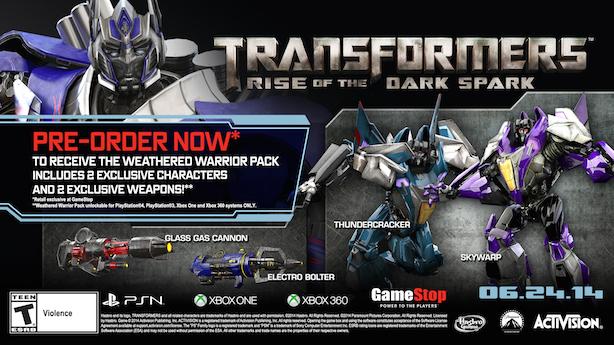 Eager to pre-order Transformers: Rise of the Dark Spark, a game we've seen a few scraps of gameplay from? Well then! GameStop would like to have your money and is rewarding pre-orders with the Weathered Warrior Pack, which includes two characters and two weapons. Considering the related press release states Dark Spark is "expected" to launch on June 24, you've got plenty of time to decide whether you're interested.

Decepticon pals Thundercracker and Skywarp serve as the Weathered Warrior's bonus characters. If you're in it for the extra firepower, the included Glass Gas Cannon generates distortion fields, while the Electro Bolter is a distance-focused, kinetic projectile launcher.

Dark Spark will arrive on Xbox One, Xbox 360, PS4, PS3, Wii U and 3DS and is reportedly being developed by Loadout creator Edge of Reality.
[Image: GameStop]
Show full PR text
Hello!

We're excited to share with you the pre-order details for Activision Publishing's upcoming third-person action-adventure, TRANSFORMERS™: RISE OF THE DARK SPARK. All title pre-orders through GameStop will gain access at launch to new characters and weapons in Escalation, the game's wave-based, four-player cooperative multiplayer, survival mode.

GameStop pre-orders will earn the "Weathered Warrior Pack" DLC, which includes two awesome characters – THUNDERCRACKER and SKYWARP – both fearsome masters of combat in service of the DECEPTICONS. The collection also delivers two powerful new weapons: the distortion field-generating Glass Gas Cannon and the long-range, kinetic projectile-spitting Electro Bolter. These potent weapons will also be available for players' use in the story-based Campaign and Escalation modes once they are unlocked. The Weathered Warrior Pack is available for PS4™, PS3™, Xbox One, Xbox 360 and PC systems only.

Thanks, and enjoy!
In this article: activision, hasbro-games, microsoft, playstation, pre-order, ps3, ps4, skywarp, thundercracker, transformers, transformers-rise-of-the-dark-spark, weathered-warrior-pack, xbox, xbox-one
All products recommended by Engadget are selected by our editorial team, independent of our parent company. Some of our stories include affiliate links. If you buy something through one of these links, we may earn an affiliate commission.