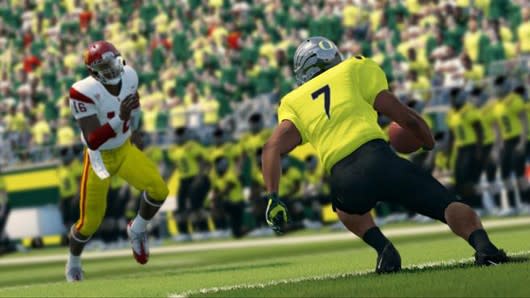 When EA settled its ongoing litigation with student athletes in September 2013 related to its NCAA Basketball and Football video games, its expenses amounted to $40 million. Now, it is tacking on $8 million more in expected expenses for fiscal 2014, bringing the total to $48 million, according to the company's year-end financial results.

EA reported $40 million in settlement expenses as recently as the last fiscal quarter, ending in December. The publisher canceled its 2014 college football video game in September, following the NCAA's decision to not renew its licensing agreement with EA in July. The settlement by EA and the Collegiate Licensing Company led to another lawsuit in November, this one by the NCAA against EA. EA planned to continue working with the CLC to develop college sports games without the use of the NCAA's marks and logos, a non-exclusive agreement that was slated to last three years. The college athlete likeness lawsuits stem back to May 2009.
[Image: EA]
In this article: basketball, college, college-athletes, college-basketball, College-Football, EA, EA-Sports, Electronic-Arts, financials, football, fy-2014, lawsuit, likeness, litigation, ncaa, ncaa-football-14, settlement, student-athletes
All products recommended by Engadget are selected by our editorial team, independent of our parent company. Some of our stories include affiliate links. If you buy something through one of these links, we may earn an affiliate commission.