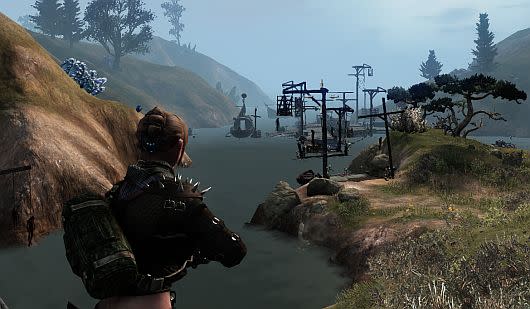 A funny thing happened last week after I decided to play Trion Worlds' Defiance for this month's Choose My Adventure: Trion announced the game will go full free-to-play! Should I consider this perfect timing to show off the game a bit before the transition? Yes, yes I should.

But before I can jump into the game, guns blazing, we have some work to do. Follow along after the cut to vote on how I'll play Defiance throughout the month of May.

If you're unfamiliar with Defiance, be sure to check out the game's main wiki for some background info and possibly even check out full episodes of the TV show on Syfy. In a nutshell, it's a sci-fi western with aliens, and the game is set up very much like an MMOFPS with character skill progression and a heavy focus on items. The graphics are gorgeous, and there's plenty to do, which is why I need your help!

New or existing character? I have a female Irathient with a 413 EGO rating and a male Human with a 54 EGO rating that I played a bit at launch, but I'd be equally interested in starting from scratch with a new character. It's up to you!%Poll-88107%
Gender is not important to stats in Defiance, as it's simply cosmetic. But it might help you pick which bathroom to use in the saloon.%Poll-88111%
The Irathient are a tribal race of Voltan who love nature and have strong spirituality. They have cat-like features with flat nasal bridges and reddish skin and hair. Humans are... well, you know... humans.%Poll-88114%
Origin is a classification that you choose to give a bit of backstory to your character. Origins have no impact on gameplay, only on starting weapons and backstory.%Poll-88117%
Weapon focus is pretty self-explanatory, but it's important to note that weapons in Defiance are changed often. Similar to a game like Borderlands, Defiance lets you swap out a continuous selection of found weapons, but skills can be gained and weapons can be mastered with repeated use. I will explore several different types of weapons, but you will be voting on my primary focus.%Poll-88122%
Next week, I'll have my character created (or taken out of retirement) and started on his or her way. From there, you'll start voting on how I'll spend my EGO (skill) points and on which aspect of the game I should focus.

Get those votes in by Friday at 9 p.m. EDT so I can get going this weekend. See you next time!

Shawn Schuster is now permanently at the helm of Massively's Choose My Adventure with you as the co-captain. It's going to be a rough ride, so put on your seat belt! Join him every Wednesday for a reader-guided deep-dive into a new MMO every month. Farcical puns about cars and farming sold separately.

In this article: ark, ark-hunter, arkfall, choose-my-adventure, cma, defiance, featured, hands-on, mmo-shooter, mmofps, opinion, poll, polls, pvp, readers-choice, sci-fi, shooter, syfy, third-person-shooter, tps, transmedia-synergy, trion, trion-worlds, tv, vote, voting, xbox
All products recommended by Engadget are selected by our editorial team, independent of our parent company. Some of our stories include affiliate links. If you buy something through one of these links, we may earn an affiliate commission.