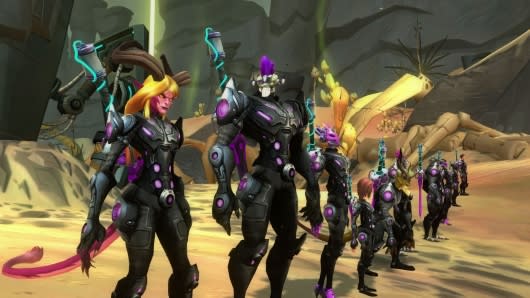 Are you ready for WildStar's open beta tomorrow? Then you're going to need the latest patch to get the fullest out of your experience. Also, you can't play unless you patch up. It's just a fact of life.

The open beta patch raises the level cap to 30, adds the journeyman tradeskill tier, and bumps up the path level cap to 20. The devs are obviously anticipating a low-level crush of players, which is why Build #6670 includes an overflow system for additional zones. Other improvements coming with the patch include German and French language options, a redesign of the video options menu, a fix so that the launcher will run on 64-bit operating systems, and optimization of the guild UI.

Also, the patch notes bear a dire warning for a particular item: "Players who hold the Moodie mask for too long... will pay ever-so-dearly for their affronts to the great Moodie Spirits. The player who dared mock the sacred oath of the mask carrier will have fiery vengeance rained down upon them, dealing a blow so powerful it will rip away their precious life force several times over. The Moodie spirits shall not only destroy the mask carrier's body, but will also place a curse on their VERY SOUL FOR ALL ETERNITY... or until the spawn timer runs out, whichever comes first."

In other news, WildStar has added an option to upgrade from the standard to the deluxe version of the game for $15 on its store page.
In this article: beta, beta-test, beta-testing, carbine, carbine-studios, ncsoft, patch, patch-notes, sale, sandpark, sci-fantasy, sci-fi, testing, update, update-notes, upgrade, wildstar, ws
All products recommended by Engadget are selected by our editorial team, independent of our parent company. Some of our stories include affiliate links. If you buy something through one of these links, we may earn an affiliate commission.