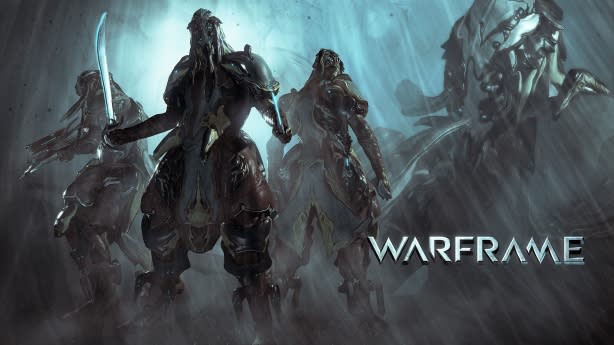 Warframe for PS4 is getting update lucky number 13, and the patch brings with it a not-insignificant number of changes. Weapons, attachments, skins, enemies and dojo customization features round out the list of what's new, but the highlights are the addition of a new character and what developer Digital Extremes is calling Melee 2.0.

Melee 2.0 revamps the game's melee combat, giving characters more attacks and stances per weapon, while also re-balancing combat itself. The new melee system also allows players who want to do away with all those fancy-schmancy guns to unequip everything but their melee weapons. In a behind-the-scenes video, developers called the system an "homage" to game series like Devil May Cry and God of War.

The new character, Hydroid, possesses mastery over the element of water, making him kind of like Aquaman. In space. But cooler. He can turn himself into a large spread of water that drowns enemies who step into it and summon giant tentacles made of water to smash and thrash his foes. He can wield multiple weapons, but his promo art shows him holding a cutlass and dagger. So in addition to being a space-ninja-Aquaman, he's also kind of pirate-like.

We're okay with this.
[Image: Digital Extremes]
Show full PR text
The PS4™ player base has spoken – Warframe® is the 2nd most downloaded App on PS4™!

This particular update is a true testament to the community-driven game development, Digital Extremes has become known for with Warframe. After several months of refining key systems in the game, based on fan feedback, Update 13 delivers what they've been waiting for including PS4 specific optimizations and customizations.

With incredible new fighting styles in Melee 2.0, an end-game system that pays homage to Warframe's predecessor, Dark Sector along with a new water-based Warframe, new enemies, new weapons and customizations, this update is a game changer.

Our players have asked and we continue to deliver.

See what our Devs have to say about this huge update here: https://www.youtube.com/watch?v=YfXZ5nzU2cs

Here are a few of the top line Highlights of Update 13: Dark Sectors.

NEW WARFRAME – Rising from the ocean depths, HYDROID harnesses the power of water with a devastating effect.
HYDROID 's powers include:
Tempest Barrage - Calls down a barrage of liquid fury.
Undertow - Become a water trap and drown unsuspecting enemies.
Tidal Surge - Crash through enemies in a ferocious wall of water.
Tentacle Swarm - Summon a watery creature from the deep to wreak total havoc.

DARK SECTORS – End game is in the lost outposts of the Solar System. Ready your Clan and build Solar Rails to lay claim to these Dark Sectors on the Star Map. Collect Tribute, a form of transit fare, from everyone who uses your rail but stay alert, Tenno -- other Clans can try to overtake your Sector.

NEW WEAPONS -
ATTICA - Quickly fire off a volley of deadly bolts with the Attica Repeating Crossbow.
NAMI SKYLA - Like the surge and crash of storm waves, a master of the Nami Cutlass and Skyla Dagger turns these two separate weapons into one fluid attack.
NIKANA - The Nikana Katana reintroduces a lost Tenno blade and with it another fragment of the old ways.

NEW WEAPON SKINS - The Shock Camo Skins' bold patterns are designed to confuse the optical processing of both robotic and organic enemies.

NEW ENEMIES - Vay Hek's Prosecutors and Guardsmen pose new threats. Find the elemental damage type they're vulnerable to and take them down!

NEW SENTINEL SKIN - Add the Para Skin to your Carrier! The perfect companion for the new Hydroid Warframe.

DOJO CUSTOMIZATION - Ten new Dojo Rooms are now available!
In this article: digital-extremes, free-to-play, patch, playstation, ps4, update, warframe
All products recommended by Engadget are selected by our editorial team, independent of our parent company. Some of our stories include affiliate links. If you buy something through one of these links, we may earn an affiliate commission.