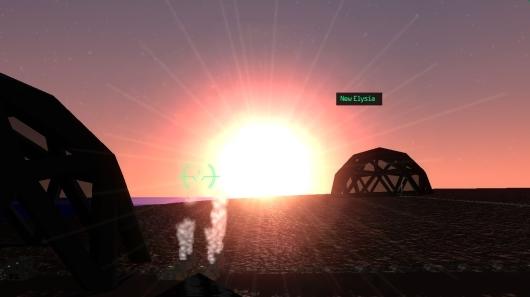 The galaxy is now open to colonization in Ascent: The Space Game -- and there's plenty of room for everyone.

Developer James Hicks has added in a colonization system to the sandbox MMO, allowing players to engage in a city-building sim among the billions of star systems. Colonization is intended to be the endgame for industrial players, with a great amount of complexity and no upper limit on the number of buildings or colonists. Every planet can be colonized, although ones with hostile environments will require more work and protective domes. To build up their colonies, players will need to recruit colonists, bring them to the planet, and task them with farming and mining the new world.

"My intent from here is to expand on the city building aspects -- giving the population more complex needs and desires, making the recruitment aspect deeper and more meaningful, and adding new production types, new structures for interacting with other players like starport facilities and stock markets, and expand on the 'out of ship' play," Hicks wrote.
In this article: ascent, ascent-the-space-game, city-building-sim, city-sim, city-simulator, colonization, desura, fluffy-kitten-studios, greenlight, interview, interviews, james-hicks, pve, sci-fi, space, steam
All products recommended by Engadget are selected by our editorial team, independent of our parent company. Some of our stories include affiliate links. If you buy something through one of these links, we may earn an affiliate commission.