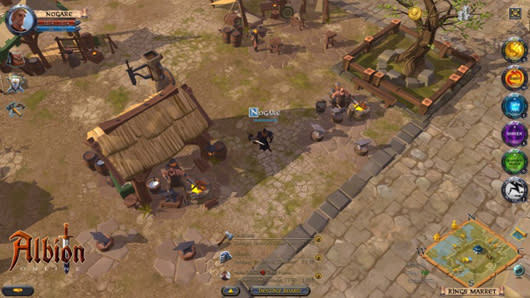 Albion's latest press release talks up the fantasy sandbox's new player-driven cities. Initially said cities will be empty and will provide players with the opportunity to both claim them and "create whole new societies from the ground up."

"These new cities will be strewn throughout the world, including deep inside PvP territory; these cities will be places where all players, regardless of their guild affiliations, can build houses and storage for themselves, utilize crafting stations and trade at an auction house, access their vaults, and otherwise prepare themselves for venturing back out into danger," explains lead game designer Robin Henkys.

Cities will be owned by a single controlling guild, which will reap various benefits including market and property taxes. Click past the cut for more details.


PLAYER-DRIVEN CITIES BECOME THE CROWN JEWEL IN ALBION ONLINE
New Depth For Both PVP and PVE Content In The Sandbox MMO
Berlin, May 15, 2014 -- Sandbox Interactive today unveils a new twist to the city life for their upcoming cross-platform Sandbox MMO, Albion Online. A sandbox MMO where the players' wishes shape the world, there will be new opportunities to mold the world with new player-driven cities. Grab all the latest game info and sign up for the upcoming closed beta test at http://albiononline.com/

Much of Albion is wild and untamed, with monsters free to roam and attack as they wish, there are also numerous cities which function as safe spots. Protected from the wilderness, with established economies and a series of services available for player use, such as crafting stations and merchants -- a respite from the constant danger of the outside world.

Some of these cities will now be player-driven cities. As the name would suggest, these are cities within the world of Albion which place all the power in the hands of the players. Initially these cities will be completely empty, devoid of all civilization; players will then have the opportunity to claim these barren regions for themselves, erect buildings and establish trade and economy. Together, players will be creating whole new societies from the ground up. And at the head of these cities, one guild will rule.

"These new cities will be strewn throughout the world, including deep inside PvP territory; these cities will be places where all players, regardless of their guild affiliations, can build houses and storage for themselves, utilize crafting stations and trade at an auction house, access their vaults, and otherwise prepare themselves for venturing back out into danger", said Robin Henkys, Lead Game Designer at Sandbox Interactive.

Any player city can be captured and "claimed" by any guild; unlike a territory, it can still be accessed by non-guild members. This means that a city will have its own player population, who will own housing, use the economic buildings and trade through the Auction House. Owning a city will bring a guild a number of benefits, such as tax revenue from the market place and property taxes -- this makes owning a city potentially very lucrative for a guild!

Among the clear benefits, this change also widens the scope of what solo players in particular can do in Albion Online; where once a player would need the protection of a guild territory and backup in order to navigate the harsh, dangerous open PvP regions, with player-driven cities any brave warrior can test themselves by exploring the PvP zones alone, fighting for silver and collecting high-tier resources, assured that their own player house, as well as opportunities to craft and repair, are never too far away.Albion Online is the first true cross-platform MMO, running on different devices including Windows, iOS and Android at the same time and in the same world!
In this article: albion, albion-cities, albion-online, cities, fantasy, player-city, player-housing, sandbox, sandbox-interactive
All products recommended by Engadget are selected by our editorial team, independent of our parent company. Some of our stories include affiliate links. If you buy something through one of these links, we may earn an affiliate commission.