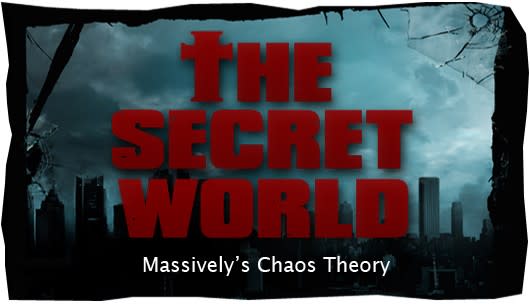 Let's hear it for the encore! If you missed any step of the The Secret World's first long-term (and by long, I mean like The Great Wall of China long) event, you've been granted a second chance. Before The Whispering Tide rolls out for good and Tokyo finally arrives, all phases of the event will be temporarily available for players to experience. Starting last week with the gathering phases and moving to the instanced phases this week, players have the opportunity to snag missing lore and check off achievements, ultimately earning the crowning piece of the bee suit: the helm.

This was definitely a smart move on Funcom's part. With this latest act, the studio shows more consideration for TSW's players and fosters an increase in goodwill, something the company certainly needs after such a long wait for Issue #9 and the more recent April Fools' Day mankini debacle. Sadly, a few easily preventable missteps marred what could have been a purely positive move.

For those who are relatively new to The Secret World, here's the short version: The Whispering Tide event started last September with players needing to help purify a portal in Agartha that the Filth from Tokyo had seeped through. When that portal was opened, players dived into an instance to fight more Filth in the form of monsters. As the event progressed, more portals needed purifying and more instances needed clearing, with each step offering a part of the lore puzzle. The entire event culminated in the fabled Flappy fight, TSW's first instanced 40-man raid. The only piece that was left was the Tokyo portal itself. An interesting problem manifested during the event. When you hear long-term, you think you have plenty of time to participate, right? Well, that's not always the case. Once players got the hang of the portal opening phases, those phases went by pretty quickly. In fact, the final gathering phase lasted less than two days, so anyone who didn't happen to log in for that weekend missed out on the chance to complete the achievements (a reward in itself for some) and obtain the final piece to the Carapace of the Immaculate Machine outfit, not to mention miss obtaining the lore. Seriously, you don't log in for two days of an eight-month event and you are just SOL? That's ridiculous! Heck, I barely made it to that phase myself.

Now let's look at the folks who have joined (or returned to) The Secret World since this event began. I can see where earning the achievement for participating in the entire event would be a badge of honor, but where do you draw the "full participant" line? What about those folks who tirelessly ran instance after instance to help move the event forward, or those who forked over countless pure materials in order to open the portals? As it stood, those who heard about the event and jumped in to participate seven-months ago were penalized just as heavily as those who walked into the game yesterday. How disheartening to join in and throw your all into an ongoing event with your fellow players only to learn that you miss out, no matter how much you contribute. Sure, Funcom could just say tough luck, but that certainly isn't going to generate any positive feelings within the playerbase.

The best player-centric solution was to do exactly what the devs did: temporarily reopen all phases of the event. So good news! Folks have the opportunity to make up what they missed before, be it completing a mission or collecting a lore piece. And kudos to the studio for giving everyone a second chance to take part in ushering in Tokyo while earning special rewards.

And now for the bad news: If you missed getting lore or completing the portal opening quests of phases one, three, and five the first time around and were planning on diving into the second half of the two-week Whispering Tide resurgence, you are out of luck. Again. That part is already over with. Bummer, huh?

As awesome as this encore event is (in both the opportunity itself and the fact that multiple phases running simultaneously for a full week gives players plenty of time to hop in and participate), the lack of adequate communication leaves a black stain on the whole thing. The positive PR and goodwill generated by the event are partially overshadowed by the confusion and frustration caused by the omission of key details. So you knew that the Whispering Tide was returning from May 7th through May 21st, but did you know that the event is not a two-week return of all the phases? Players who missed the message on the launchpad may not have realized that the event is actually split into two week-long sections with only certain phases going on each week because that information was not present in the other announcements regarding the event. Those who have now missed their second chance due to a lack of clarity on Funcom's part are understandably irked, as are those who were suddenly denied their planned Flappy raids (it being the wrong phase and all). (If Flappy's your thing, as of yesterday's update the launcher announces that the raid will also be available from the 21st to the 28th.)

Frustration also cropped up when players were faced with all those portals to reopen at once; some threw their hands up and wondered how enough materials would be gathered to complete the task. In actuality it didn't even matter if players gathered resources beyond just finishing their initial quests for the achievement; the portals would reopen regardless on the established date.

All these frustrations were unnecessary and could have easily been avoided if the original announcements had just been clear and provided all the details. And please, stop sneaking it into the launchpad here and there!

Despite the communication snafu, the encore event is definitely a positive. Added to the recent decisions of Sidestories and replayable story missions, it shows me that devs are focusing on the players. And you can't discount the fact that with this event finally winding down come May 28th, we just might finally be poking our toes into Tokyo in just over two week's time. And I know I am not alone in saying, it's about time!

Conspiracies, paranoia, secrets, and chaos -- the breakfast of champions! Feast on a bowlful with MJ on Thursdays as she infiltrates The Secret World to bring you the latest word on the streets of Gaia in Chaos Theory. Heard some juicy whispers or have a few leads you want followed? Send them to mj@massively.com and she'll jump on the case!
In this article: 3-faction, 3-factions, buy-to-play, chaos-theory, conspiracy, conspiracy-thriiller, dark-days-are-coming, dragon, faction, faction-pvp, fantasy, featured, funcom, horror, illuminati, issue-9, mythology, opinion, sci-fantasy, secret-world, secret-world-chaos-theory, skill-based, subscriptionless, templars, the-secret-world, the-secret-world-chaos-theory, three-faction, three-faction-pvp, three-factions, tsw, tsw-chaos-theory, tsw-dragon
All products recommended by Engadget are selected by our editorial team, independent of our parent company. Some of our stories include affiliate links. If you buy something through one of these links, we may earn an affiliate commission.