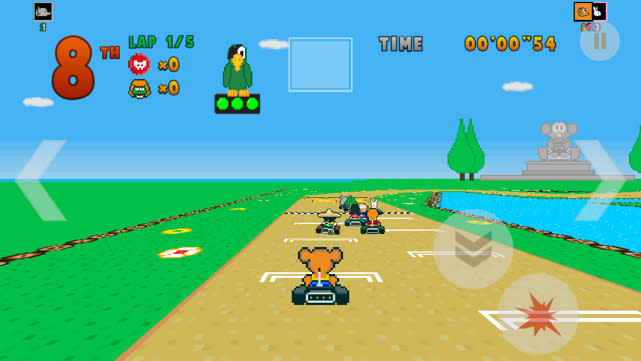 I've pointed out apps taking advantage of popular IP before, but Poppy Kart is different. Rather than stealing established characters or franchise names to attempt to lure in unsuspecting buyers, Poppy Kart is filling a demand that Nintendo could, but so far refuses to. While clearly inspired by Mario Kart on SNES, Poppy Kart is a fantastic, high-quality racing game that is quite simply a blast to play... and it's making Nintendo's money without them.

Poppy Kart is a kart racing game with 16-bit characters, Mode-7 style graphics, and playful weapons that will undoubtedly remind you instantly of Nintendo's classic racer. Developer Webrox was very careful not to actually copy any assets from the SNES Mario Kart title, and all of the racers and tracks are easily distinguishable from the ones they are clearly emulating.

The racing is fantastic. Everything is super smooth and moves very fast, there are plenty of karts and tracks to keep you busy for a long while, and even the musical score is a love letter to anyone who enjoys the Mario Kart series. There are also some great bonuses here like multiple on-screen or accelerometer-based control options, which greatly expands the number of people who will find the game enjoyable.

In short, it's exactly what a retro Mario Kart release would look like on iOS, and it's become quite popular. The reached the top 100 racing games in 47 countries, and broke the top 100 highest grossing in 19 countries. And it hasn't just been a flash-in-the-pan success, as the game as been a consistent performer for several months, all without a single recognizable character or world class marketing budget behind it. The user reviews are extremely popular, and the users who took the time to pen written reviews mention Mario Kart more often than not.

"This game is amazing. The full game costs $2, but I would be willing to pay $5 for this game! If any of you reading this are Mario Kart fans, this is a must have."

"Just like the original Mario Kart, worth every penny."

"This looks really fun but I wish Nintendo would make a Mario Cart for iPhone."

So here you have customers praising a game for simply being a high-quality nod to a long-standing Nintendo IP, begging Nintendo to embrace the App Store itself, and suggesting they'd be willing to pay even more than the current US$1.99 price to unlock the full game. If this isn't proof that Nintendo has money waiting on iOS, I don't know what is.

To be clear, I don't think that Poppy Kart should be removed or looked down upon in any way -- it's a fantastic game that I highly recommend. This is Nintendo failing its own fans. The company needs to embrace iOS. We know it, Nintendo knows it, and app developers know it. But until they do, apps like Poppy Kart will continue to deliver where Nintendo refuses to, and Nintendo's investors will continue to question why they are leaving money on the table.

In this article: app store, apps, business, ios, mario kart, nintendo, opinion, poppy kart
All products recommended by Engadget are selected by our editorial team, independent of our parent company. Some of our stories include affiliate links. If you buy something through one of these links, we may earn an affiliate commission.