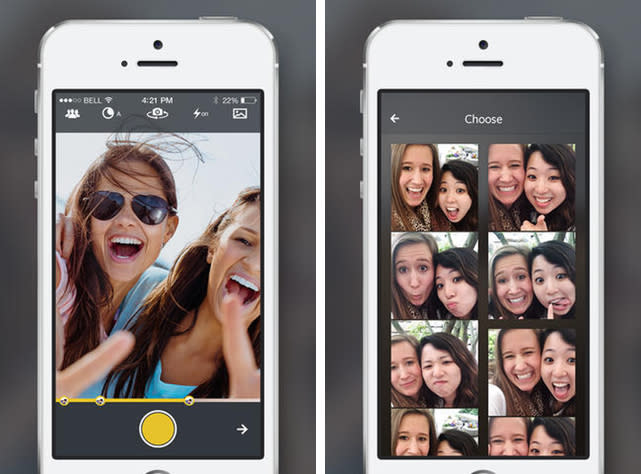 Vhoto is a new photography tool that allows you save still photographs from a video. Instead of scrolling through your video frame-by-frame, Vhoto scans it on your behalf pulling out the best still shots. You then can choose your favorite snapshots and edit them as needed. When you are done, you can either save them to the iOS Photo Roll or share them on a social network, including Vhoto's own built-in network.

As someone who films children, I find it exceedingly difficult to capture a still shot of my kids using the camera. Inevitably, someone is moving, frowning or crying in the photo. Vhoto helps with this photographer's dilemma, allowing you to capture video of your children while they are playing and pull out a still photo that encapsulates the moment. Some might argue that Vhoto takes some of the skill out mobile photography as you are not able to frame a shot like you can with a still photo. The free-form nature of video, though, allows you to capture a moment as it happens and in a way that you didn't expect. Vhoto proves extremely useful in this style of filming as it takes the grunt work out the process by picking out the still frames for you.

When picking out stills, Vhoto's performance met my expectations, pulling out a number of quality photos for each video clip. On average, the app generated 10-15 photos for a 30-second clip. All of the photos were high-quality stills with minimal blur. The app also did a great job at capturing action, showing my daughter jumping from rock to rock, for example. It didn't hit every shot, though. In the photo below, I would rather have the moment the bow is drawn all the way back instead the one Vhoto generated. The only drawback to Vhoto is that it has a high signal to noise ratio due to the shooting technique it fosters. The app uses on bulk processing -- pulling a dozen or more images out of a clip with hundreds of frames. Out of the 20 photos from each video clip, I found I only kept one or two images. Most photos were repetitive, while only a few were truly unique moments. That being said, Vhoto is still a valuable tool in a photographers arsenal of apps, you just have to know when to use it. Sometimes it's easier to frame a photo and capture the perfect moment using single or burst mode shooting, while other scenes lend themselves well to this style of video capture made possible by Vhoto. It's also useful for pulling stills out of pre-existing video, compensating for those moments when you decided to shoot video, but kicked your self later for not taking burst mode shots.

Vhoto is available for free from the iOS App Store. It is compatible with the iPhone and requires iOS 7.1.

In this article: app review, appreview, newsletter, photography, review, Vhoto
All products recommended by Engadget are selected by our editorial team, independent of our parent company. Some of our stories include affiliate links. If you buy something through one of these links, we may earn an affiliate commission.