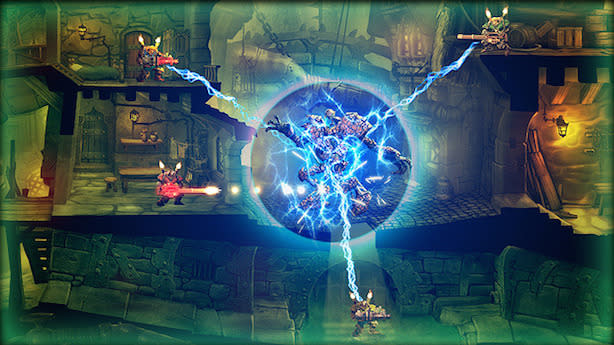 None of the conversations we've heard about pollution have ever brought up the whole "oil can totally turn you into orks" thing, but now that Dieselstormers has cleared its funding goal on Kickstarter, it's a reality the diesel-fueled town of Ravensdale will face. Naturally, the remaining humans are up for sorting things out with guns in a solo or co-operative, side scrolling manner, but with their city speckled with oil canisters and goop pits, mashing triggers won't always be the best strategy.

Missions focus on assassinating, sabotaging or liberating targets, but optional goals like timed objectives can be tackled in exchange for bonuses. Revisiting cleared stages might not feel entirely redundant, either - the city blocks of Ravensdale have an element of procedural generation to them. The Kickstarter page describes levels as being built from "different layers" of architecture that provide a "constantly shifting and growing context" for ork-targeting shootouts.

Dieselstormers will let its heroes mix-n-match gun components to tailor an arsenal to their personal play style, but bringing friends along will allow for use of the Arc Connector. This ball of destruction is tethered to all players and can be guided toward enemies to dish out damage, provided the squad controlling it is capable of the involved teamwork. It's upgradable with stackable mods across all players, too, so every team's go-to finisher won't be the same spectacle.

Although Dieselstormers is bound for Steam, developer Black Forest Games assures it will release a DRM-free version "as soon as the sales success makes it viable to set up this infrastructure ourselves." Dieselstormers has its sights on an initial PC launch with Mac and Linux versions following, but Black Forest is "planning for" Xbox One, PS4 and Wii U as well.
[Image: Black Forest Games]
In this article: black-forest-games, co-op, dieselstormers, kickstarter, linux, mac, microsoft, pc, playstation, procedurally-generated
All products recommended by Engadget are selected by our editorial team, independent of our parent company. Some of our stories include affiliate links. If you buy something through one of these links, we may earn an affiliate commission.