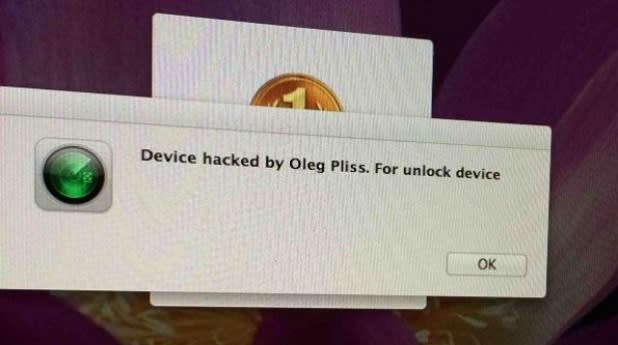 Some iOS and Mac users in Australia this morning woke up to a concerning message indicating that their devices had been remotely locked by a hacker demanding upwards of AU$100 to unlock them.

Originally reported by The Age, affected users ("dozens" reported issues on social media or Apple's discussion boards) were alerted via a "Find My iPhone" message that their device had been hacked by "Oleg Pliss", a name not believed to be associated with the true perpetrator or perpetrators.

Troy Hunt, an IT security expert, speculated that hackers were using compromised login credentials from recent data breaches to access accounts and lock users out.

As is often the case, web users largely use the same password across their multiple online services, meaning that if their password is compromised in a breach at one firm and they do not change it, their other accounts become vulnerable.

As a general rule, employing the same password across multiple sites is potentially dangerous and should be avoided. Password reuse can lead to a number of security issues, including compromised accounts and more

If you happen to be an affected user looking to alleviate the issue, relevant support threads have sprung up on Apple's website with users sharing information as to how to deal with it. Notably, The Age relays that iOS users who set up passcodes before enabling Find My iPhone can unlock their devices with no problem; those who set up the passcode as part of the Find My iPhone process may not be able to unlock the device without assistance.

Update: Gigaom alerts us to the fact that an iOS user in the U.S. is now claiming to have been hit with the ransomware as well.

In this article: find my iphone, hacking, IOS, news, security
All products recommended by Engadget are selected by our editorial team, independent of our parent company. Some of our stories include affiliate links. If you buy something through one of these links, we may earn an affiliate commission.