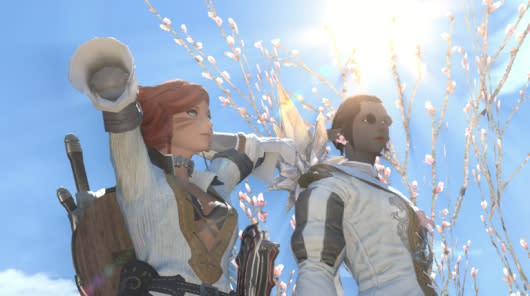 The first of two official livestreams for Final Fantasy XIV has just wrapped up at E3. While the stream focused on a variety of questions from the fans, two big points were hit during the discussion. The first was the revelation of a new class slated for introduction in patch 2.4: the Rogue class, which will lead into the Ninja job. This will be a damage-dealing class that dual wields knives and daggers, complete with enhanced movement skills and stealth abilities.

Producer Naoki Yoshida also announced that the game's marriage system will allow any two characters to be joined together, regardless of race, nation, or gender. The translated answer explained that in the world of Eorzea, it seemed inappropriate to restrict the system. Players will be given the options of having their characters pledge eternal love or simply eternal friendship, with the possibility of special mounts for the happy couple.

Massively's on the ground in Los Angeles during the week of June 10-12, bringing you all the best news from E3 2014. We're covering everything from WildStar and Landmark to Skyforge and H1Z1, so stay tuned!
In this article: class, classes, con, console, consoles, convention, convention-coverage, e3, e3-2014, electronic-entertainment-expo, event-coverage, expo, fantasy, ff, ff14, ffxiv, final-fantasy, final-fantasy-14, final-fantasy-xiv, in-game-marriage, marriage, marriage-system, massively-event-coverage, naoki-yoshida, news, news-items, square, square-enix
All products recommended by Engadget are selected by our editorial team, independent of our parent company. Some of our stories include affiliate links. If you buy something through one of these links, we may earn an affiliate commission.