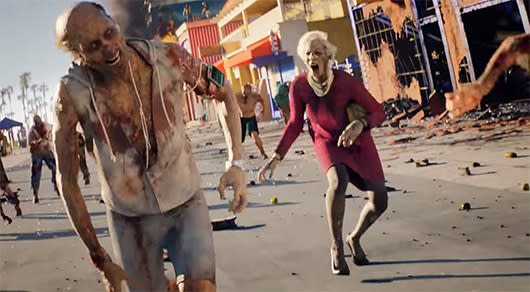 It's not the "world's first motion-captured cat," nor the lovely, gory graphics that should attract players to Dead Island 2. Instead, it's that developer Yager is proudly crafting a game that lets players live out their gory dreams of surviving amidst the zombie apocalypse with the core goal of using hordes of the undead as so many blood-filled stress balls.

Those hoping for a drastic departure from the original Dead Island gameplay formula are likely to be disappointed by Dead Island 2. The focus remains on dispatching zombies with as much brutality as possible, using makeshift weaponry, vehicles and the occasional environmental aid. The game's tone, however, is moving in an entirely new direction. Contrast the above trailer with the much-lauded Dead Island debut cinematic which saw a family being (literally) ripped apart to a particularly maudlin tune, and you'll understand what Yager is going for here. This is a game that revels in its destruction of the undead, and wants you to have as much fun as possible at the end of the world.
[Image: Deep Silver]

Despite its mechanical similarities to its predecessor, Dead Island 2 is a much, much larger game. Instead of a small island setting, developer Yager uses the entirety of California as its zombie playground. Following the zombie outbreak of the first game, California has been quarantined, and while most normal people have become flesh-eating revenants, a select few are immune. These represent the player characters, a group who've come to kill zombies in as spectacular fashion as possible.

From sending zombies flying into the air via well-aimed sledgehammer strikes to crushing these walkers beneath a busted chandelier, Dead Island 2 is purely focused on the joys of wanton gore. If you stumble across a lawn full of zombies, you could waste precious moments dispatching each one, or you could simply shoot a propane tank, igniting the lawn, while you sit back and watch the flames gradually consume the grass and its undead occupants.

No one expects zombies to be smart, but those found in Dead Island 2 are a few grade levels above those found in its predecessor. Set off a car alarm and the nearby horde will swarm the noise. Turn on a stereo and you can lead the mindless walkers from room to room. Like most features in Dead Island 2, this serves as a precursor to more violence. Those cars will inevitably explode if you pump them full of enough rounds, and guiding zombies into particularly vulnerable sections of a home allow you to drop decrepit fixtures onto their unwitting heads.

As the one guy in the room who picked up on the very subtle George Romero reference toward the end of the game's cinematic trailer, Dead Island 2 is clearly aimed at people like me - those who concoct zombie survival plans while lying in bed, or reject potential mates because they lack any skills that might be useful in the event that the dead return from the grave. Despite this, I'm not entirely sold on what I saw. The game's crafting system appears to maintain the clunkiness of its predecessor, though, at least, you won't need to find a workbench each time you want to create a new killing implement. Likewise, while the developer claims "all of California's key landmarks" will be represented in the game, we only saw a few small blocks of a sole neighborhood.

Still, with a nebulous "Spring 2015" release date, Yager has plenty of time to flesh out its vibrant zombie playground. Our demo was dated "2013," so there could be many changes in store for the developer's over-the-top take on the zombie apocalypse.

In this article: dead-island, dead-island-2, deep-silver, e3-2014, microsoft, pc, playstation, ps4, techland, xbox-one, yager
All products recommended by Engadget are selected by our editorial team, independent of our parent company. Some of our stories include affiliate links. If you buy something through one of these links, we may earn an affiliate commission.