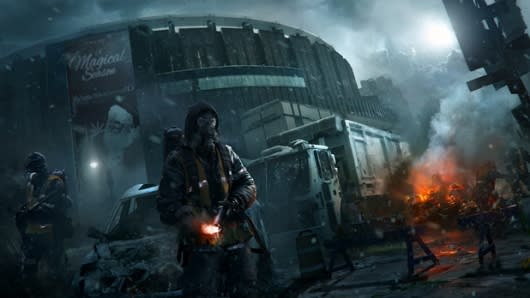 Ubisoft interviewed... itself, we guess, by chatting up The Division Game Director Ryan Barnard about some of the high-tech gadgets and interesting locales that players will encounter.

The team's been showing off the ECHO function, a way to gather intel by projecting a colorful holographic visual. These will be used to help further the story and allow for mystery-solving during quests. "They're in places that would have information that could be relevant or important," Barnard said.

Barnard was coy about the story details but said that players will be fighting against factions like the Cleaners to save New York City. He also mentioned that players will be unlocking bases as they progress. Unlike static gameplay hubs, these bases will have upgradable modules that can be improved through various co-op activities.

You can catch The Division fever by watching the E3 trailer after the break.

Massively's on the ground in Los Angeles during the week of June 10-12, bringing you all the best news from E3 2014. We're covering everything from WildStar and Landmark to Skyforge and H1Z1, so stay tuned!
In this article: con, console, consoles, content, convention, convention-coverage, e3, e3-2014, electronic-entertainment-expo, event-coverage, expo, massively-event-coverage, news, news-items, patch, patches, pc, playstation-4, ps4, ryan-barnard, the-division, the-division-pc, tom-clancy, trailer, trailers, ubisoft, update, updates, video, videos, xb1, xbone, xbox-one
All products recommended by Engadget are selected by our editorial team, independent of our parent company. Some of our stories include affiliate links. If you buy something through one of these links, we may earn an affiliate commission.