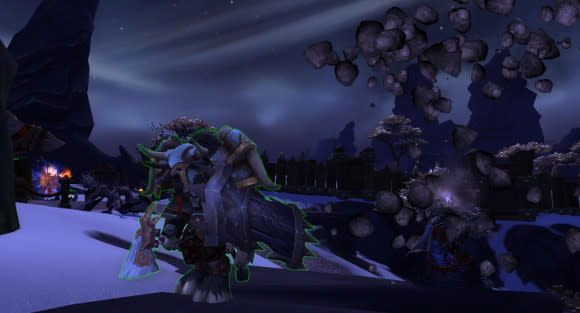 In the new theorycrafting sticky on the Warlords of Draenor Alpha forums, there's a big post by Celestalon that explains how we're going to be able to solo old raids and such with the item squish making us proportionately less powerful in those raids. It's worth breaking down here, for those of us (like me) who enjoy that sort of thing for either fun or transmog.

First up, all players will gain a damage reduction factors when attacked by creatures that are lower level, starting at Cataclysm content and heading down from there. Creatures from Mists of Pandaria and, presumably Warlords of Draenor will not be affected by this. So once a creature from Cataclysm content or below (Wrath, BC and Vanilla) attacks a character that outlevels them, there will be a formula that determines how little damage the character takes. Celestalon presented it as such.

What this means is that, when your level 100 character goes inside a level 80 Wrath raid, they'll have a very large reduction in how much damage they take. This doesn't just apply to the damage you take, either - damage dealt is modified as well.

These two formulations aren't the only ones that will be applied, however. Celestalon mentioned that there was a desire to allow for power increase during an expansion before Mists of Pandaria to still provide benefit while dealing with creatures that were outleveled, and so the following formula also exists and is used when it would be more of a benefit to a player.

So basically, what we have here are a series of formula which exist entirely to benefit players as they outlevel content, to keep from (as an example) having a level 92 tauren protection warrior die while farming Molten Core. Not that that happened on the Alpha, because it's not like I would be looking for transmog gear on the Alpha, that'd be nuts.

As you can see, the overall effect is that, as a player levels, inherent power vs. mobs increases. This won't just be of benefit soloing old raids. There's nothing that says that your level 31 druid won't get a DR benefit fighting a level 30 mob. It may not be a very large benefit, but it should be there, and it should mean that as you level you'll inherently be stronger, take less damage and deal more to mobs you outlevel. That's an interesting way to keep current scaling effects while reducing overall stats on gear.

In this article: celestalon, forums, leveling, outleveling, soloing-old-content, theorycrafting
All products recommended by Engadget are selected by our editorial team, independent of our parent company. Some of our stories include affiliate links. If you buy something through one of these links, we may earn an affiliate commission.