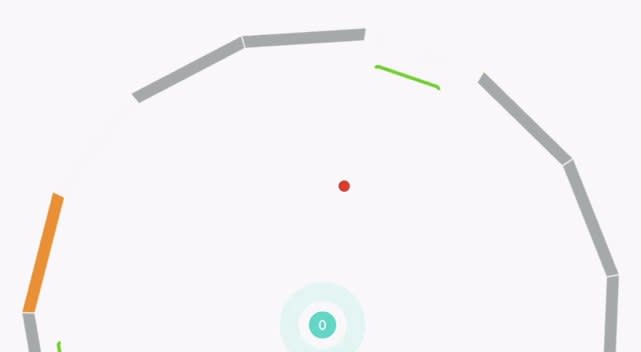 Putting a new spin on an established game mechanic isn't easy, and when you're talking about a game idea as simple as bouncing a ball off of a block, innovation is even more difficult. But against all odds, the new iOS game Bricks manages to pull it off, thanks to simple motion controls, a gorgeous aesthetic, and a relaxing vibe.

Unlike most block-busting games, Bricks doesn't simply stack of a bunch of destructible blocks in front of you. Instead, the objects you need to hit are arranged in a huge ring around your ball, and tilting your phone causes the ring to spin. This means that even a handful of blocks can give you problems, especially if your sphere is zipping around at a particularly high rate of speed.

Thankfully, you have a bit of control over how quickly your ball moves, as each level starts with you physically flinging the ball around the play area. If you send it on its way gently, you'll have an easier go of things, but if you're looking for a challenge you can zip it extremely fast.

As the levels fly by you'll be introduced to a bunch of items and features that will change the way you approach each level. From portals, layered blocks, shields, and temporarily indestructible objects, your skills will definitely be put to the test.

Each level is procedurally generated, meaning you'll never go through the same collection of levels twice. This leads to endless replayability, as your selection of levels is essentially infinite. That's a pretty crazy value for the game's US$0.99 price tag.

The game's musical score is also a treat, with relaxing tunes that won't stress you out, even if the gameplay itself does just that. It helps make the game a nice kick-back-and-chill experience, rather than a game you'll want to play in short bursts. The only drawback is that thanks to the game's motion controls, it plays better if your phone is laying on a flat surface, which isn't always ideal for your posture.

Regardless of that, Bricks is a definite must-buy for App Store veterans and newbies alike. You'll learn it instantly but spend many hours trying to outdo yourself.

In this article: apps, bricks, gaming, puzzle, review
All products recommended by Engadget are selected by our editorial team, independent of our parent company. Some of our stories include affiliate links. If you buy something through one of these links, we may earn an affiliate commission.