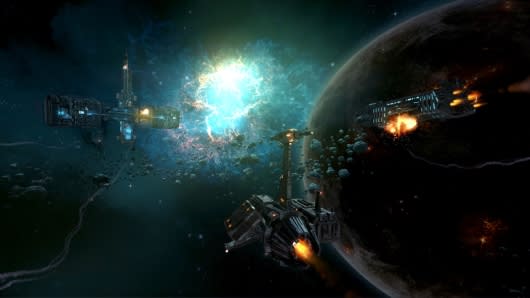 The Steam Summer Sale is that glorious time of year when we drop money on games that we subsequently won't remember purchasing until months later, leaving us collectively scratching our heads and asking when we bought these titles. So how'd you like to add an early access MMO to that pile of games you won't remember you have? All three of the Entropy Founder's Packs are now available at a 33% discount until the end of the Summer Sale on June 30th.

The sale coincides with a recent update to the game introducing the gladiatorial combat sport known as NOVA, a free-for-all brawl where five people enter and only one leaves. The smallest package available gives players access to two character slots as well as full game access, with higher tiers including a variety of extra ships, more character slots, and bonus character creator options. If it sounds like it's right at your speed, jump in on the deal before the end of the month.

We've included the latest video interview with the devs after the break.

In this article: artplant, beta, beta-access, beta-testing, early-access, early-development, entropy, exploration, news, news-items, promotion, promotions, sandbox, sci-fi, steam, steam-summer-sale, trailer, trailers, video, videos
All products recommended by Engadget are selected by our editorial team, independent of our parent company. Some of our stories include affiliate links. If you buy something through one of these links, we may earn an affiliate commission.