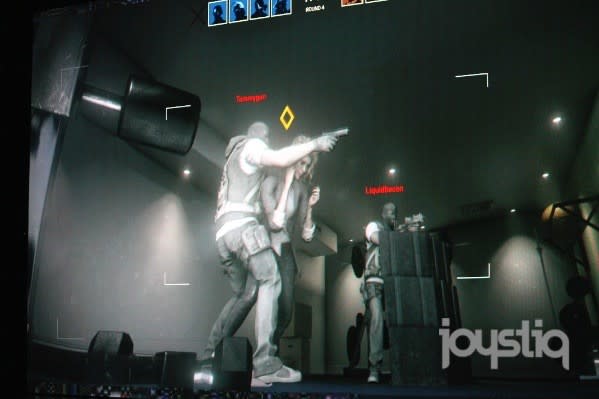 Rainbow Six: Siege was the surprise finale of Ubisoft's E3 conference, featuring a team of players descending on a suburban home where a woman was held hostage by a group of heavily armed bad guys. The woman cowered while the house exploded around her, and she was referred to as "The Hostage" throughout the demo, passed back and forth between enemies and rescuers as if she were a flag to capture.

The apparent objectification of the woman didn't sit well with many viewers – but the game will also feature men as hostages, Technical Artist Oliver Couture told RPS: "We're also gonna have male hostages. That's part of the plan."

Couture described the technical aspects of the hostages in Rainbow Six: Siege as the epitome of next-gen. "We're trying to define next-gen with the hostage," he said. "We call that a 'living hostage.' So she'll react to explosions and things like that. It's pretty cool. She'll cough because of the dirt in the air, she covers herself when there's shooting – those sorts of things. We want the player to be able to move her into different positions, for there to be fluid controls. It's a balance between player comfort and reality."
[Image: Ubisoft]
In this article: damsel-in-distress, hostages, men, microsoft, pc, playstation, ps4, rainbow-six-siege, Ubisoft, women, xbox-one
All products recommended by Engadget are selected by our editorial team, independent of our parent company. Some of our stories include affiliate links. If you buy something through one of these links, we may earn an affiliate commission.