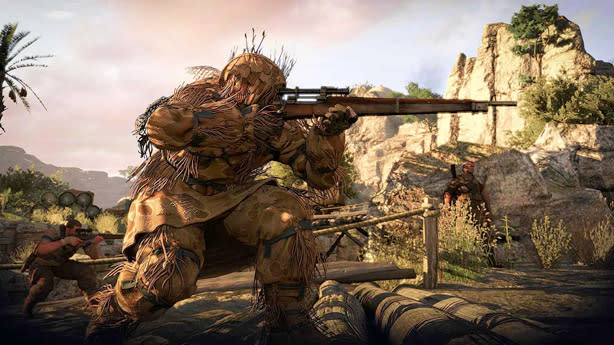 Rebellion's Sniper Elite 3 hits store shelves in North America next Tuesday, but Xbox One players will have to queue up one of the largest day-one patches in recent memory the first time they boot it up.

Upon its launch in Europe earlier this week, the retail Xbox One version of Sniper Elite 3 prompted players to download a 16GB patch at startup, Videogamer reports. Speaking to Eurogamer, a Rebellion representative noted that the patch addresses data sync issues between the retail and downloadable versions of the game and ensures DLC compatibility in its multiplayer modes.

The patch only applies to the retail Xbox One edition of Sniper Elite 3, as the downloadable Xbox Marketplace version already includes all patch data. The PlayStation 4, PlayStation 3 and Xbox 360 versions will see a much smaller day-one-update.

[Image: Rebellion]
In this article: 505-games, day-one-patch, microsoft, rebellion, sniper-elite-3, xbox-one
All products recommended by Engadget are selected by our editorial team, independent of our parent company. Some of our stories include affiliate links. If you buy something through one of these links, we may earn an affiliate commission.