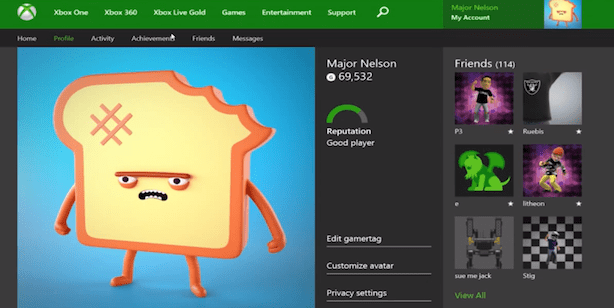 An incoming Xbox.com update should make being away from your Xbox One a little more bearable – starting next week, you can use the site to check Xbox One data in the form of player activity, Achievements and gameplay clips, presumably when you're definitely not supposed to be working. The above demonstration video gives us a pretty good sense of what to expect from the update, though it probably won't help us match Larry "Major Nelson" Hyrb's friend count.

Whether its a personal profile or a friend's, users will be able to scroll through and play gameplay clips on a general profile, or pull up a user's entire library of clips to look through. Comparing Achievements will function similarly to how it worked with Xbox 360 records, though drilling down to a game's specific Achievement list will let users grab a large version of any Achievement's artwork. Yay, options!

Major Nelson describes the impending update as "the beginning of a number of community-requested features on Xbox.com," with more news coming in the summer and fall. Considering this update reflects the highest-voted request on the Xbox forums, it sounds like rallying support for the features you'd most like to see wouldn't necessarily be a waste of time.
[Image: Xbox]
In this article: achievements, gameplay-clips, microsoft, update, xbox-one, Xbox.com
All products recommended by Engadget are selected by our editorial team, independent of our parent company. Some of our stories include affiliate links. If you buy something through one of these links, we may earn an affiliate commission.