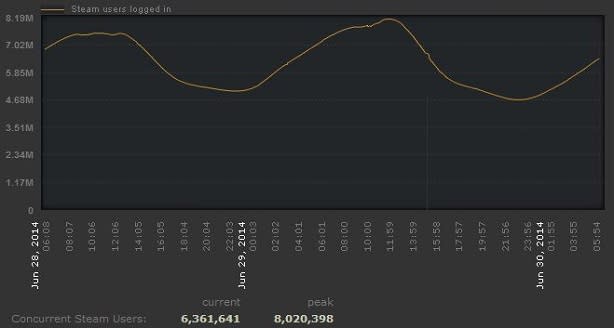 Steam is quite popular during its Summer Sale thanks to its massively discounted games. How popular? As it turns out, the PC game distribution service reached a new peak of concurrent users, 8,020,792 to be exact, according to stats provided by Valve. Steam broke the 8 million mark as the storefront updated on Sunday for the final day of the Summer Sale.

Valve revealed in January at its Dev Days event that Steam reached 75 million active users in total, up from the 65 million it had in October. The Summer Sale ends at which ends at 1:00 p.m. ET (10:00 a.m. PT) today, and includes games like The Wolf Among Us ($8.49), Tomb Raider ($4.99), Civilization 5 ($7.49), Dishonored ($4.99) and the Complete Edition of Metro: Last Light ($6.49).
[Image: Steam]
In this article: Concurrent, concurrent-users, mac, pc, peak-concurrent-users, STEAM, steam-summer-sale, steam-summer-sale-2014, valve
All products recommended by Engadget are selected by our editorial team, independent of our parent company. Some of our stories include affiliate links. If you buy something through one of these links, we may earn an affiliate commission.