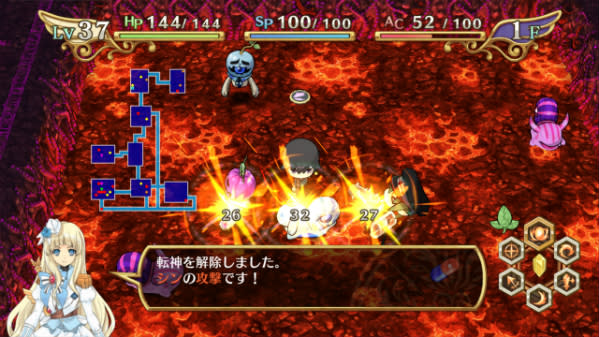 Localization specialist NIS America announced three new games for North America and Europe over the weekend, kicking off with The Firefly Diary this fall on Vita. Nippon Ichi's puzzle-platformer will be followed in 2015 by Guided Fate Paradox sequel The Awakened Fate Ultimatum and Vita RPG Criminal Girls: Invite Only.

The Firefly Diary is heavily based around the Vita's touch capabilities. As Gematsu reports, you control a pair of firefly-like fairies with the task of guiding a young girl through perilous ruins. One of the fairies is based in a light world, the other a shadow world, and you switch between the two to solve the game's puzzles. Here's where the touch gameplay come in: The light fairy is controlled by the front touchscreen, while the rear touch pad moves the shadow fairy around (Push Square notes you can tie both fairies to the touchscreen if you prefer.) If you fancy a gander at The Firefly Diary, check out the trailer below the break.

Players of The Guided Fate Paradox may be aware a sequel is coming to Japan on July 24, titled The Guided Fate: Cross Thesis Awakening. NIS America's bringing it West as the less confusingly titled The Awakened Fate Ultimatum, and like the first game it's coming to PS3. The follow-up to last year's roguelike stars a boy who's attacked by devils - damn the luck - and left to die. Happily he's mysteriously saved, only to then be thrown into a war between angels and devils. Sounds a bit like that episode of South Park where Kenny gets a PSP, but that's probably as far as the similarities go.

The third import is Criminal Girls: Invite Only, a revamped Vita version of the 2010 PSP RPG Criminal Girls. The game stars seven delinquents damned to Hell, and your task is to lead them to redemption through RPG battles and... NSFW stuff. Suffice to say, NIS America says it's "edited certain aspects of this game" to bring it to as many fans as possible in the West.

[Image: NIS America]
Show full PR text
Anime Expo, Calif. (July 3, 2014) – NIS America is happy to announce that we will be bringing
Criminal Girls: Invite Only to North America and Europe next year! The game takes the much
adored 2010 Playstation®Portable title Criminal Girls, which was released in Japan only, and
revamps it with a host of brand new content exclusively for the Playstation®Vita. Explore the
depths of Hell as you lead a female gang of delinquents on their quest to absolve themselves of
their sins and be reborn on Earth. But be careful, leading a crew of delinquents to battle and
discovery isn't as easy as it sounds. Wrestle with the girls' conflicting battle plans, spend some
one-on-one time keeping the girls motivated to be their better selves, and uncover their deepest,
darkest secrets on the way to reforming them into not just upstanding citizens, but a cohesive, and
effective battle group.

About the game:
Seven delinquents, seven sins, and only one way out. Just hired for a new, mysterious job, you
soon discover that this isn't your normal prison gig. You've been entrusted with the care of a crew
of girls whose sins have damned their souls to Hell and an eternity of punishment... Their only
hope of salvation is for you to recognize their unique histories, and to guide them along the path
to redemption. Navigate through the four trials of the Redemption Program, and motivate your
crew of delinquents to learn the skills to redeem themselves, or leave them to their fate.

Key points:
Mind Your Manners: These girls aren't your typical RPG team – they have minds of their own! To
defeat the convicts doing their time in Hell's dungeons, you'll need to listen to your team's
desires, and choose your path to victory from the ever-evolving repertoire of skills, spells, and
combo attacks that they want to use.
Touching Gameplay: Connect with the girls, and uncover each of their unique personalities
through one-on-one motivational sessions with a unique use of the front touchscreen and rear
touchpad, and fulfill the girls' special requests to discover more about their interesting, and often
dark pasts.
Criminal Girls, Reborn: This Playstation®Vita update will mark the first time a Criminal Girls game
makes its way to the US, and with English text! The update also brings previously unplayable
characters into the fray-Miu and Himekami-and includes brand new scenarios and levels to
challenge your prison smarts. It also revamps the much lauded motivational gameplay with
updated artwork, and brand new Live2D graphics and effects. Notice: In order to bring this title to as many fans as possible in both North America and Europe, NIS America has edited certain aspects of this game
Show full PR text
Anime Expo, Calif. (July 3, 2014) – NIS America is happy to announce that we will be bringing The
Awakened Fate Ultimatum to North America and Europe next year! The game will be released
exclusively for the PlayStation®3 entertainment system.

About the game:
Several years after a certain revolution came to pass, and the powerful Satanael was defeated, the
devils were still dominant in their constant war against the angels. Meanwhile, a certain Celestia
was resorting to guerilla warfare to survive. They focused on researching a way to create a "God"
to use as their ultimate weapon against the devils. After creating the "Fate Awakening Crystal,"
which can turn a human into a God, the angels could only wait for the day they found someone
who was compatible with it...

One day in the Human World, a boy is attacked by a group of devils on his way home from school.
He is stabbed through the heart, but as he is dying, he gets saved by a mysterious girl, and wakes
up in an unknown location-Celestia. As if guided by the Fate Awakening Crystal that is implanted
in his chest, he finds himself thrust into the middle of a war between angels and devils. With his
newly awakened powers, he must choose how best to use them, and ultimately, which of the two
new girls in his life he will be able to save...
In this article: criminal-girls-invite-only, europe, guided-fate-paradox, Nippon-Ichi-Software, NIS-America, north-america, playstation, playstation-vita, ps3, release-date, the-awakaned-fate-ultimatum, the-firefly-diary, vita
All products recommended by Engadget are selected by our editorial team, independent of our parent company. Some of our stories include affiliate links. If you buy something through one of these links, we may earn an affiliate commission.