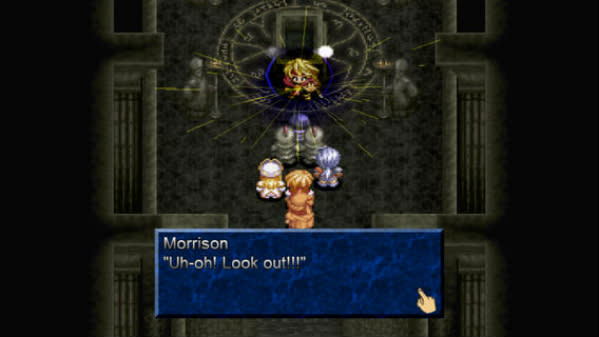 After mere months on the App Store, Tales of Phantasia iOS will soon stop being available or even playable in any way. As Touch Arcade discovered, Bandai Namco quietly posted an update on the app's iTunes page, noting it will remove the game from the store on August 28. Not only will Tales of Phantasia iOS not be available after that, but Bandai Namco says "the app and all associated services will become unusable." That's likely because of server shutdown, since the game requires players be online to save.

In the update, Bandai Namco apologized for the inconvenience, but it didn't explain why it's removing the game. We've reached out to the publisher to learn more, but we suspect the move has something to do with the mixed reception the iOS version received.

The app currently has a three-star review score on iTunes, and while some customers are clearly enjoying the game, others are frustrated with its monetizing system. While the free-to-play iOS port of the SNES RPG retains the core story and battle system, it ramps up the difficulty level with in-app purchases in mind.

A review from alex_tang2256 reads, "I love the Tales series and all, but this game is terrible for making players need to pay for things. The bosses are overly difficult and they are impossible to beat without using your entire inventory, and most of the time you still die."

Those thoughts are echoed in Touch Arcade's own review: "The whole monetization into oblivion is pretty upsetting, particularly when you keep in mind that fans of JRPGs on iOS are certainly used to paying premium prices for games, and would likely do so happily for a title of Tales of Phantasia's fame. On another level, it's also very frustrating for Tales fans, because this is only the second English version of the game, and it's inexplicably worse to play than the already-terrible version that was released before on GBA."

[Image: Bandai Namco]
In this article: Bandai-Namco, ios, ipad, iphone, mobile, Namco-Bandai, tales-of-phantasia
All products recommended by Engadget are selected by our editorial team, independent of our parent company. Some of our stories include affiliate links. If you buy something through one of these links, we may earn an affiliate commission.