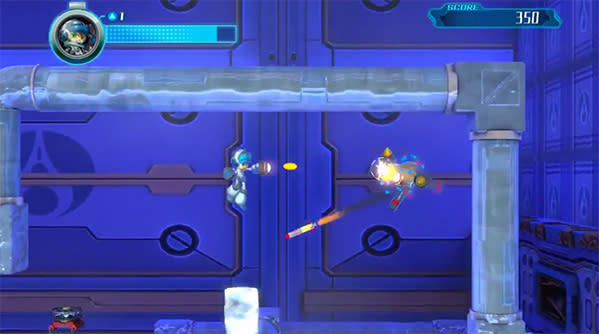 Comcept revealed additional stretch goals for Mighty No. 9 a few short days ago, giving fans the opportunity to bolster the game's development with funding via PayPal on its official site. The $100,000 stretch goal was introduced to fund English voice acting for the game, which the original game's funding support won't cover. Mighty No. 9's funding page has since changed, however, upping the developer's goal to $200,000 and adding Japanese voice acting to its list of ambitions.

Additionally, a Japan-only Makuake crowdfunding project from Comcept popped up with a 10 million yen (roughly $98,296) goal, specifically geared toward providing Japanese voices for Mighty No. 9. We've reached out to Comcept to clarify the two funding avenues and whether the two goals for Japanese voice acting overlap.

The game, a project by Mega Man creator Keiji Inafune, earned over $4 million combined from Kickstarter and PayPal in October 2013. It was by far the biggest earner in the crowdfunding space in the past year, which saw a total of $35 million spread across 341 gaming projects. Mighty No. 9 is expected to launch in spring 2015 for many platforms: Xbox One, PS4, Xbox 360, PS3, PC, Mac, Linux, 3DS, Wii U and Vita.
[Image: Comcept]
In this article: 3ds, comcept, CrowdFunding, English, Japan, japanese, Keiji-Inafune, kickstarter, mac, makuake, microsoft, mighty-no-9, nintendo, pc, playstation, playstation-vita, ps3, ps4, stretch-goals, vita, voice-acting, wii-u, xbox, xbox-one
All products recommended by Engadget are selected by our editorial team, independent of our parent company. Some of our stories include affiliate links. If you buy something through one of these links, we may earn an affiliate commission.