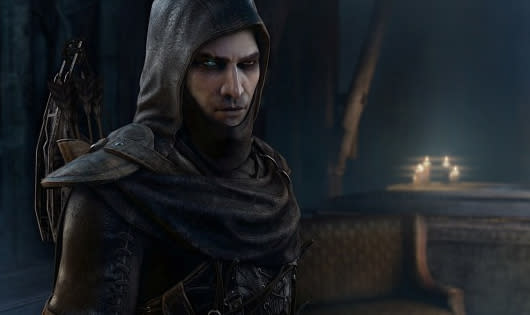 A Thief film is in development from Vertigo and Prime Universe, Hollywood news site Tracking Board reports. Adrian Askarieh and Roy Lee, two of the people behind film adaptations of Deus Ex and Minecraft, are tagged to produce.

There's no extra juice to the report, but we can imagine what a Thief movie would look like: Garrett, the brooding and highly trained medieval burglar, is on a mission to steal an expensive trinket from a castle overlooking a seedy village. After an hour of establishing his sad backstory, Garrett sneaks past the guards, kills a few (silently), and makes it to the grand ballroom that houses the shiny object. He approaches it, reaches out a steady hand, and then – a voice interrupts him. He turns, only to be immediately blinded by the regal beauty of the queen. His heart is forever stolen. Tagline: Who's the real thief?

What. A. Twist. (Please, Askarieh and Lee, don't do anything like that. Not that you would, but ... please.)
[Image: Square Enix]
In this article: Eidos-Montreal, film, Hollywood, Square-Enix, thief, thief-2014, thief-4
All products recommended by Engadget are selected by our editorial team, independent of our parent company. Some of our stories include affiliate links. If you buy something through one of these links, we may earn an affiliate commission.