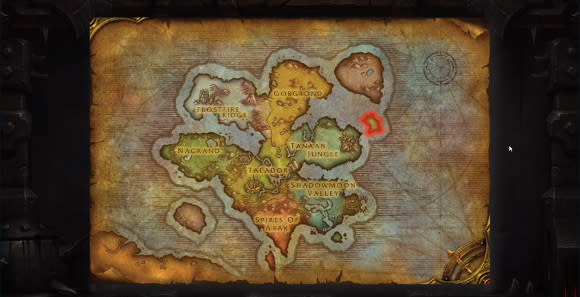 Wowhead has datamined a whole bunch of new achievements, and the ones for Ashran interested me greatly - since I did some level 100 PvP recently (I didn't do very well at it, but I think at least part of that is my sheer unfamiliarity with it at this point) I'm definitely interested in how Ashran turns out.

I assume one of those two Take Them Out achievements will eventually be switched to Alliance, and hopefully captain will be spelled correctly. (The achievements have different ID's.) It seems the Alliance gets to summon something called Fangraal (presumably this fellow), and there's something called The Everbloom where Kirin-Tor Battle Mages can die while fighting something called Yalnu (since there's an achievement for them not dying, I assume it's fairly easy for that to happen) - these are pretty tantalizing hints for what we're going to see once we get in there. I'm wondering if there's a Horde equivalent to Fangraal - possibly this Lifeless Ancient Protector, or this Ancient Protector (both are relatively close in ID and come up on a search for 'Horde Guardian')? Time will tell.
In this article: Achievements, Ashran, PvP, warlords-of-draenor, World-PvP
All products recommended by Engadget are selected by our editorial team, independent of our parent company. Some of our stories include affiliate links. If you buy something through one of these links, we may earn an affiliate commission.