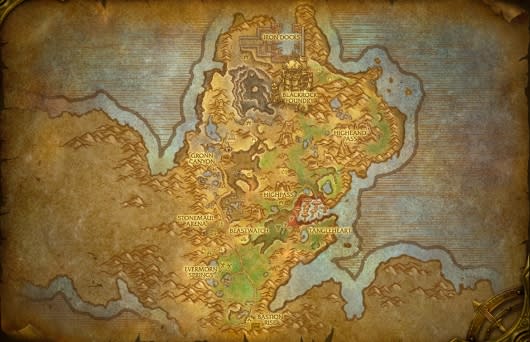 World of Warcraft players who pine for the "good old days" of open world PvP may get to sup from that cup again come Warlords of Draenor. The devs are whipping up a new island, Ashran, that pulls upon lessons from past PvP zone designs to create something that encourages as close to the real open world PvP experience as one can get (and still have it designed).

Ashran is for level 100 players who want to pop in and engage in up to 100v100 battles. Unlike past PvP zones, players won't have to join a raid group to partake in the fun and can choose between world and objective-based PvP. "We want players to get caught up in the moment and become emotionally invested in the outcome of each new encounter, whether it's just getting the drop on a member of the opposite faction player or getting revenge for a stolen kill," Blizzard wrote.

The team also previewed another one of Warlords of Draenor's zones with Gorgrond. Gorgrond is an area split between the themes of creation and destruction and the biomes of heavy flora and barren wasteland.
In this article: activision, ashran, beta, blizzard, blizzard-entertainment, draenor, expansion, fantasy, gorgrond, open-world-pvp, preview, pvp, warcraft, warlords-of-draenor, wod, world-of-warcraft, world-pvp, wow, zone-preview
All products recommended by Engadget are selected by our editorial team, independent of our parent company. Some of our stories include affiliate links. If you buy something through one of these links, we may earn an affiliate commission.