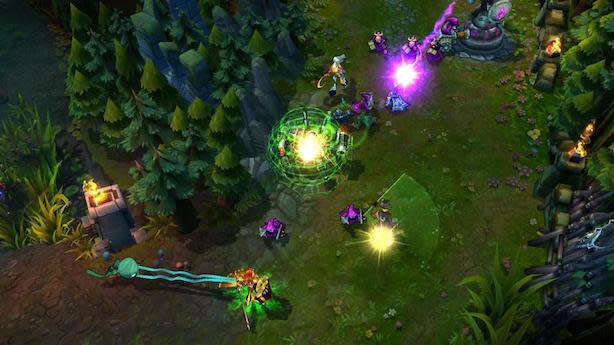 If being a jerk on the Internet is a competition, Shane "Jason" Duffy might be in the champion's running. Police raided the 21-year-old's room regarding a League of Legends security incident in 2011, which Riot eventually addressed in 2012, and Duffy's online activity while on bail earned another visit from police in 2013.

In an interview with The Daily Dot, Duffy claimed involvement for brute forcing League accounts, selling character skins from accounts for $200-$800, leaking League of Legends: Supremacy through a Riot employee's Twitter account, and creating a service that could knock League players out of games in exchange for money.

Duffy told The Daily Dot in November that his group had scored access to millions of accounts, which he claims were harvested via a senior Riot employee's account. Duffy says that despite Riot noticing a breach and telling staff members to change their passwords, this employee did not, allowing Duffy's group to set up backdoor software on Riot's servers. By the time Riot realized what was happening, Duffy claims they had grabbed information for 24.5 million accounts.
Shortly after leaking Supremacy, Duffy's equipment was seized as he was arrested, but after being released on bail, he created a service that booted League players from games for a price. Duffy told The Daily Dot he was eventually making more than $1,000 per day from the site, with a lone month bringing in 880 individual payments. Police eventually arrested him once more, again seizing his equipment and the equivalent of $110,000 worth of bitcoins.

Duffy is facing nine charges related to his work on Riot servers, five of them involving fraud, and is currently awaiting a ruling in a Queensland court, due on July 24. A judge has ordered Duffy to stay offline until the trial is complete.
[Image: Riot Games]
In this article: hack, hacker, jason, league-of-legends, shane-duffy
All products recommended by Engadget are selected by our editorial team, independent of our parent company. Some of our stories include affiliate links. If you buy something through one of these links, we may earn an affiliate commission.