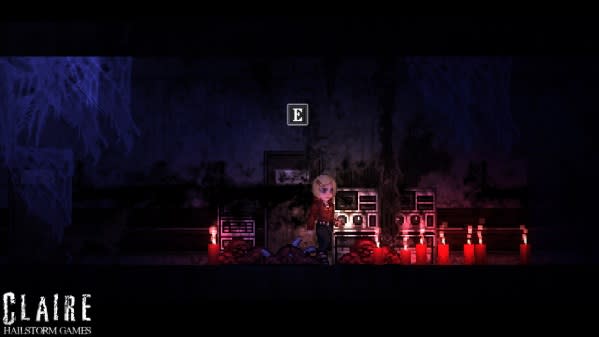 It's been awhile since we heard from Claire, the pixelated 2D horror game from Hailstorm Games; almost three years, actually. Having gathered enough votes on Steam Greenlight since then, the game is now complete and available to purchase on Steam.

Claire follows the life of a young girl named Jennifer - just kidding, her name is totally Claire. Anyway, like most young children, Claire has nightmares about the things that go bump in the night. Unlike most children, Claire actually has something to fear, as her nightmares become real and invade the real world. Armed with a flashlight, Claire must explore and survive the darkness as she seeks out her mother.

Claire has been available since the beginning of the month for PC, but Mac users just got their chance at exploring its haunted pixels earlier this week.

[Thanks, David!]
[Image: Hailstorm Games]
In this article: claire, hailstorm-games, horror, indie, mac, pc, steam
All products recommended by Engadget are selected by our editorial team, independent of our parent company. Some of our stories include affiliate links. If you buy something through one of these links, we may earn an affiliate commission.