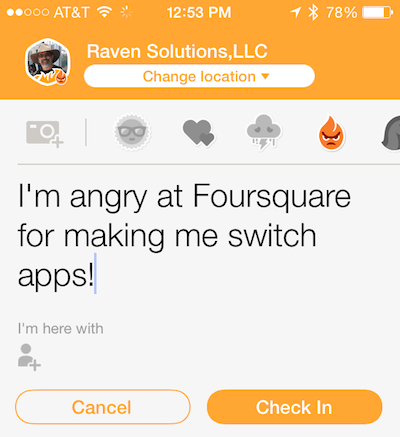 OK, I'm depressed. For years, I've enjoyed using Foursquare to check in at restaurants, airport gates, hotels, and even my own home. During that time, I became "mayor" at a number of different locations and loved getting the occasional badge for doing something awesome like checking at 30 different BBQ restaurants or 50 different microbreweries. Well, that all changes tomorrow when Foursquare will become more of a discovery app, forcing those of us who have loved using the app for check-ins to move to the company's Swarm app instead.

If you've used Foursquare regularly over the past few months, you've seen the not-so-subtle changes. First, it seemed almost impossible to get a mayorship, mainly because they had dropped the feature. Next came the almost daily suggestion to download and install Swarm. And now, check-ins will be moving to Swarm tomorrow, meaning that you really do need to download the free app.

Foursquare obviously didn't consult with users before making the move to two apps, one for discovery and one for check-ins. Swarm currently has about a one-and-a-half star rating out of five stars on the App Store, and Foursquare -- which used to be one of the more popular location-oriented social networking apps -- is now down to about two-and-a-half stars, primarily because users are upset with what the company decided to do. Take a look at some of the comments in the App Store reviews: I'm not sure the Foursquare Labs folks thought this one out very well. For those who want a single app to perform check-ins, see what your friends are up to, and even get ratings and tips for places you're thinking about trying, you might need to consider just using Yelp or -- God forbid -- even Facebook.

For myself, I'll give Swarm a try, but I have a bad feeling that one of my favorite apps -- Foursquare, which took top billing in my social networking iPhone folder -- is going to get deleted soon along with it.

In this article: apps, foursquare, iOS, opinion, reviews, swarm
All products recommended by Engadget are selected by our editorial team, independent of our parent company. Some of our stories include affiliate links. If you buy something through one of these links, we may earn an affiliate commission.