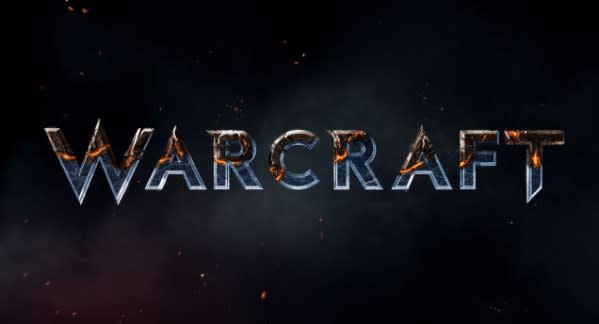 While we have yet to see any footage and only have the scantest of details regarding the Warcraft movie and its plot, San Diego Comic-Con has afforded us an opportunity to glimpse once more into the world director Duncan Jones (Moon) is creating.

First up: a new logo. It's quite a bit different than the game's version, with a new font that's much cleaner-cut and less bulky. It also trades the game's golden hue for a split that's half steel-blue, half scorched black. Second, Legendary has also revealed several of the movie's props, including an Alliance shield and the Horde's Doomhammer. You can check them out after the break.

The Doomhammer has a long and storied history within the Warcraft universe, so its inclusion in the film hints at the potential appearance of several major characters. We won't spoil which ones here, but feel free to read up on the Doomhammer Wiki entry if you want to know more.

While filming is reported to be complete, the Warcraft movie won't cross swords - or hammers - until March of 2016. Man that is a big hammer.
[Image: Legendary Pictures]
In this article: duncan-jones, legendary-pictures, movie, warcraft, warcraft-movie
All products recommended by Engadget are selected by our editorial team, independent of our parent company. Some of our stories include affiliate links. If you buy something through one of these links, we may earn an affiliate commission.