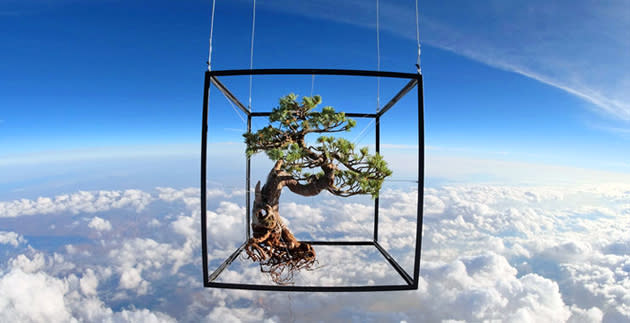 Google has a long list of environmental initiatives -- and its latest project is to outfit its Street View cars with environmental sensors to track down methane emissions that contribute to climate change. But when it comes to futuristic transportation, there's no greater innovator than Elon Musk. The serial entrepreneur recently appeared on The Colbert Report, where he discussed Tesla, the Hyperloop and SpaceX.

In other space news, this week NASA scientists suggested that future moon dwellers could live in the hundreds of caves that dot the surface of the moon. It's believed that the caves would protect humans from sun radiation, meteors and the wild temperature swings on the moon. Japanese artist Azuma Makoto also captured our imagination this week by sending a bonsai tree into space and snapping some gorgeous photos as it orbited the Earth. The time when space exploration was limited to a pair of superpowers -- the USA and the Soviet Union -- is long gone; these days, several other countries are looking to explore faraway planets. The United Arab Emirates just announced that it's setting up a Space Agency – and it plans to send an unmanned probe to Mars by 2021. There's still plenty to explore on our own planet, though. A giant hole in the earth, about 262 feet in diameter, was recently discovered in Russia's far north, and scientists are baffled about the cause of the chasm.

Sea levels are rising, and if we continue the course we're on, they're likely to continue to rise significantly. Case in point: The amazing Cape Romano dome homes located off the coast of Florida are now being swallowed up by rising sea levels. On the topic of sea-level rise, this week Inhabitat interviewed architect Koen Olthuis about how cities can adapt to rising sea levels. His response? Embrace the water by building on it instead of running from it. In other ocean-related news, Captain Charles Moore, the man who discovered the Great Pacific Garbage Patch back in 1997, recently returned to the Pacific and discovered that permanent islands of plastic now exist within the patch. And you won't believe what people are doing to horseshoe crabs -- every year, over 250,000 of the creatures are captured so that humans can harvest their blue blood.

What if you could transform your entire house with the push of a button? That's precisely the idea behind the Sharifi-ha House, which features rotating rooms that swing outwards to soak up sunlight and provide additional space. Football season is fast approaching, and when it begins, the San Francisco 49ers will move into their new home at Levi's Stadium, the country's first LEED Gold-certified NFL stadium. The stadium is equipped with photovoltaic panels that will generate enough energy to power all 10 games each season. A historic farm in the Dutch countryside also received a green energy upgrade with the addition of a modernist solar shed that provides 100 percent of the farm's energy needs. And Sainsbury's, a popular UK grocery store, just became the first in the country to be totally powered by food waste. The store recently split from the national power grid in favor of food power created through the anaerobic digestion of food scraps.

On the wearable-technology front, the productivity blogger Maneesh Sethi has developed the "Pavlok" wristband, which shocks you into forming better habits. If you don't meet your goals -- whether it's exercising or simply arriving to work on time -- the device will deliver a jolt of electric current to your wrist. But if you want a bracelet that will help you instead of hurt you, you might be better off with the Safelet, a wristband that signals for help when you're in danger. Using a Bluetooth-connected app, the Safelet calls the police or the other emergency services when its wearer is in trouble. And in what could be a major breakthrough for STD prevention, an Australian biotech firm has developed a gel that actually fights STDs and has proven effective in killing 99.9 percent of viruses. A condom that uses the gel has received approval for release in Australia, and it could hit shelves within the next few months.

In this article: eco, ecofriendly, environment, green, inhabitat, inhabitatsweekingreen, transportation
All products recommended by Engadget are selected by our editorial team, independent of our parent company. Some of our stories include affiliate links. If you buy something through one of these links, we may earn an affiliate commission.