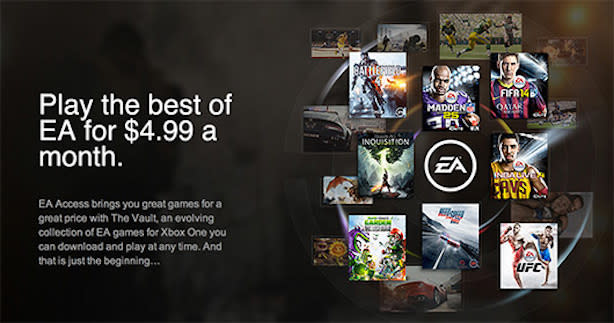 Welcome to Joystiq Weekly, a "too long; didn't read" of each week's biggest stories, reviews and original content. Each category's top story is introduced with a reactionary gif, because moving pictures aren't just for The Daily Prophet.
EA announced EA Access this week, a monthly or yearly service that gives subscribers a digital library of games from the publisher's catalog. PlayStation Plus and Games With Gold are comfortable ideas at this point, but for such a substantial publisher to start their own service on a console without making any hardware themselves? That's pretty interesting.

Hopefully we won't see a flood or other publishers launching competitors for PlayStation and Xbox's services, though. Paying one monthly fee for Netflix and maybe two monthly fees for video games is manageable, but if the console space starts feeling crowded with subscription services, we can imagine the sense of value will be continually reduced with each additional arrival. Then again, we could probably stomach one more if Nintendo cooked up something for the Virtual Console...

There's way more to this week than pondering our breaking point for monthly subscription fees though. Capcom, Sony and Nintendo had earnings reports, Homefront: The Revolution got adopted by Deep Silver's parent company, and PlayStation Now entered its open beta. It's all waiting for you after the break!

[Image: EA]
In this article: capcom, destiny, divinity-original-sin, ea-access, Ephemerid, games-with-gold, gaymerx2, gaystation-4, homefront-the-revolution, joystiq-weekly, nintendo, oddworld-new-n-tasty, playstation-now, playstation-plus, sony, watch-dogs
All products recommended by Engadget are selected by our editorial team, independent of our parent company. Some of our stories include affiliate links. If you buy something through one of these links, we may earn an affiliate commission.