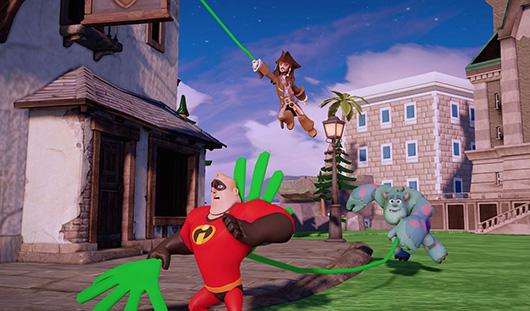 Disney Interactive, the gaming arm of Disney's multi-appendaged corporate beast, is performing better than last year in the company's third quarter of 2014. Revenue for the Interactive business is up 45 percent to $266 million, while operating income is up from a $58 million loss last year to a $29 million surplus this year.

"The increase in game sales was driven by Disney Infinity, which was released in the fourth quarter of the prior year, and the success of the Tsum Tsum and Frozen Free Fall mobile games," Disney's Q3 financial statement reads. "The decrease in product development costs was due to fewer titles in development and the benefit of restructuring activities."

The Interactive division is the smallest revenue-generator at Disney again this quarter, outpaced by media networks, parks and resorts, studio entertainment (films), and consumer products. Overall revenue is up 8 percent in Q3 to $12.5 billion. This quarter's results set records at Disney.

"We're extremely pleased with these results and we are also thrilled with the spectacular performance of Guardians of the Galaxy, which holds great promise as a new franchise for our company and once again reinforces the tremendous value of Marvel," The Walt Disney Company CEO Robert Iger says.

Disney Infinity: Marvel Super Heroes 2.0 Edition hits shelves on September 23 in North America, now with 100 percent more Guardians of the Galaxy.
[Image: Disney]
In this article: disney, disney-infinity, Disney-Interactive, financials, q3-2014
All products recommended by Engadget are selected by our editorial team, independent of our parent company. Some of our stories include affiliate links. If you buy something through one of these links, we may earn an affiliate commission.