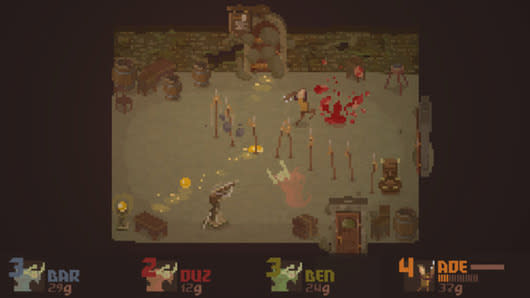 Having survived a brief delay, Powerhoof's Crawl arrives on Steam Early Access alongside the most melodramatic trailer you'll see today.

In keeping with its title, Crawl is a multiplayer dungeon crawl that casts one player as the heroic human and the others as ghosts inhabiting the depths. As per standard dungeon ghost protocol, the living are viewed as anathema, so the spirits do everything in their power (which includes summoning beasts and setting off traps) to snuff out the aforementioned hero. Once a ghost kills a human, the ghost then becomes human, allowing the former victim a shot at wrecking the world of the living. With up to four players occupying a single dungeon, you can see how this would get hectic very quickly.

Those interested in taking Crawl for a spin can grab the Early Access release for $10. Like all Early Access games Crawl is not yet a finished product, so don't be surprised if you find a few bugs.
[Image: Powerhoof]
In this article: crawl, early-access, pc, powerhoof, steam, valve
All products recommended by Engadget are selected by our editorial team, independent of our parent company. Some of our stories include affiliate links. If you buy something through one of these links, we may earn an affiliate commission.