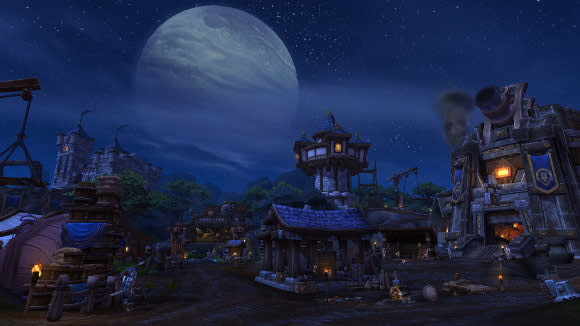 Today's Queue gets a little meta. You've been warned.

Now that the Ashran hub is in-game, what do you think?

Ashran is a toughie because even if it was freaking amazing, it could never live up to the Karabor hype. It isn't Karabor and it can't be as good as we all thought Karabor would be. Even if I say Ashran is great, I have to include the disclaimer that I really would have preferred Karabor.

Honestly, though, I don't think Ashran is great. It's much better than what was expected, but its layout feels chaotic and slapped together even if it isn't. It evokes the feeling of a shanty town where all of these people just showed up and started squatting. And that's pretty much what we did with the place, we're squatters, so the feeling is accurate. But it doesn't give me that "epic" sensation, you know? Things are scattered everywhere. That said, it feels more spacious than the shrines in Mists of Pandaria which is a plus in my eyes. One of the reasons I avoided the shrines was how claustrophobic they felt. Ashran having a more open environment increases my likelihood of using it.

I'm willing to bet there will be players who love the Ashran hubs. There are countless players who liked the Shrines, for example, while I didn't like them at all. I'm an old school guy that misses the days of having a new city to explore -- Burning Crusade's Shattrath was my jam. Dalaran wasn't quite as cool (being so much smaller) but it was a step up from the shrines.

Where do orcs come from?

How do I get rid of the raccoon that just woke us up at 2am?

Be polite, but firm.

With the upcoming Warlords of Draenor, might we find out who Grom Hellscream chose to be Thrall's mother?

Are you confusing Thrall and Garrosh? Thrall's parents are Durotan and Draka and Grom has nothing to do with that. If you meant Garrosh ... sorry, I don't have an answer. I don't think anything relating to Garrosh's mother is in there, but I admit I haven't done every quest in every zone.

I was browsing wowhead professions for WoD and saw something that shocked me (ok, just pissed me off a bit) wich was that most crafted items had more then one gathering profession materials, by example on BS some had both ore bars and skins, last I can recall something like this was in vanilla and some from BC (except for the primals whathever name according to expansion), does anyone know the reasoning for this, because it seems kinda dumb to me.

I'm pretty sure garrisons are to blame here. I think it's dumb, too, but when you add a feature that lets every character potentially access everything acquired from every gathering profession ... you have to make everyone use those things, too. Or else you have millions of leather floating around with only a select few making use of it. They created a problem and forced a solution.

As mentioned in the comments yesterday, it's pretty weird that nearly all potions are made of fish/meat. Or ore.

Is The Queue written with any particular "quota" in mind? Like, do you guys have a specific word count you have to hit? Do different authors just try to aim for a certain number of questions? Or is it just sort of up to the author?

It's totally up to the author. There are a lot of factors that determine how long a specific Queue is -- including, admittedly, how we feel that day. Due to the nature of The Queue, it either needs to be written late the night before or early morning on the day of publication. I'll admit that sometimes I'm just tired and don't have what it takes to answer really long/complex questions. (That's why we sometimes read a question wrong -- we were half-asleep when we read it and there wasn't necessarily someone else awake to proofread.) Other days, my night owl tendencies let me put more time into The Queue than it would otherwise get.

Generally, though, I just eyeball it. Sometimes I'll answer just a few long questions and say I'm done. Other days I'll answer a much larger pool of shorter questions. I stop when I run out of questions or when it looks good. I have no metric for what "looks good" beyond what my eyeballs tell me. There are also days where I have a whole lot on my plate, whether it be other important posts or behind-the-scenes stuff you guys don't see. When that happens, there isn't always someone else around to pick it up -- again, it's written very late or very early. Those tend to be shorter, but I still try to make sure there's substance.

The nature of the questions on a particular day can determine what happens, too. For example, I know enough lore to answer pretty basic stuff. I don't have enough lore knowledge to plumb the depths of every extended universe publication like Matt Rossi or Anne. If there's a rash of tough lore questions, I avoid answering them so I don't grossly misinform. If there's a day where the majority of the questions are tough lore questions, I have very little material to work with and end up with something even I'm not satisfied with. However, Anne is great with them, so if they come up on one of her days, she can easily write 500 words answering a single question.

I also have personal issues with being too terse. If I can answer a question with a simple yes, then sometimes I do that, move to the next question, and look back at it later and realize it might come across as dismissive. When that happens, I try to add more information that might be relevant just to put more meat on the bone. It often results in my Queues appearing very short (even to me) despite answering a solid number of questions. Today's is one that will bother me. I answered seven questions, but some of my answers are short, some are jokes, and this one is a monster. But this one isn't even about World of Warcraft, it's about WoW Insider. At some point we need to set it free.

is there an avocado vendor NPC in-game? I seem to remember being told of one.

I searched on Wowhead for an avocado and found none. This is an outrage.

Have questions about the World of Warcraft? The WoW Insider crew is here with The Queue, our daily Q&A column. Leave your questions in the comments, and we'll do our best to answer 'em!
In this article: ashran, avocado, warlords-beta, warlords-of-draenor-beta
All products recommended by Engadget are selected by our editorial team, independent of our parent company. Some of our stories include affiliate links. If you buy something through one of these links, we may earn an affiliate commission.