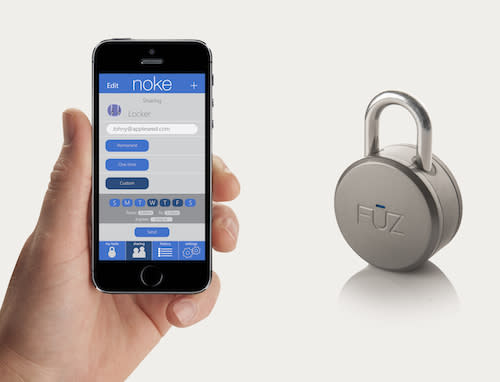 I was so excited about this Kickstarter campaign that launched this morning that I decided to forgo waiting until our usual Thursday crowdfunding roundup to write it up. The new project is from FÜZ Designs, the same team that brought you the EverDock last year. But the Noke (pronounced No-Key) is a much more ambitious project than the universal dock, bringing Bluetooth connectivity and the power of apps to that bane of students and bicyclists, the padlock.

Somewhat akin to the Kwikset Kevo in how it works, Noke seeks out an app on your iPhone for a digital key and unlocks it in a second. Those digital keys can be shared with anyone who has the app, making it simple to let someone borrow your locked bike or open your storage locker to borrow something.

Noke is water-resistant and uses a replaceable battery for power. If you don't happen to have your iPhone with you and really need to get the Noke unlocked, you're in luck -- there's a way to program a "click code" to open the lock in emergencies.

Obviously Noke fills a need; the project has been live for about four hours and is already at over 40 percent of its funding goal. After you watch the launch video, you might be tempted to be a backer as well.

In this article: accessories, bluetooth, crowdfunding, FUZ Designs, iPhone, kickstarter, news, Noke, padlock
All products recommended by Engadget are selected by our editorial team, independent of our parent company. Some of our stories include affiliate links. If you buy something through one of these links, we may earn an affiliate commission.