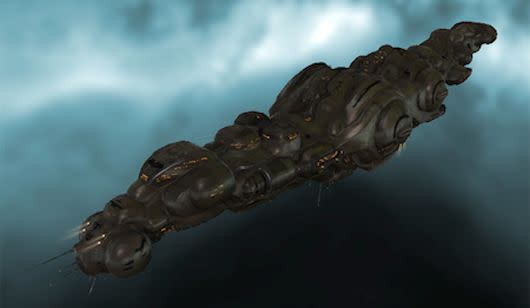 Fans of popular EVE Online lottery site SOMER Blink received some bad news yesterday. After four years of operation, the site is going inactive, with a shutdown that its front page calls a temporary and perhaps permanent hiatus. All players with prizes waiting will be able to claim those prizes, and all ISK in the system will be returned to players over the next several months, starting with those players who had over 5 million ISK in their accounts.

What led to this shutdown? The site administrators claim that CCP created a toxic environment and reversed previous statements without warning, resulting in a situation which made the site no longer enjoyable to work with. CCP has issued its own statement, expressing regret at the loss of a community site while stating that the promotion that caused the controversy "was not representative of the original proposal that was brought to CCP." The community team will provide further information soon, although there will be no interference in the refund process.

[Thank to Dab for the tip!]

The EVE Community Team recently became aware of a new promotion by SOMER Blink, both through communication with the CSM9 and other channels. In this post I'll discuss the promotion, the concerns raised by it, and CCP's response.

For those of you not familiar with SOMER Blink, they are a player-run EVE Online site that is not a business affiliate of CCP and that is managed independently outside of the EVE client. Some EVE players enjoy SOMER Blink because their games and promotions offer an opportunity to win valuable items in EVE using in-game currency, and because SOMER Blink has had a history of supporting other player-run efforts with their in-game profits.

Other EVE players have expressed skepticism over SOMER Blink for a range of reasons, from distaste for such peripheral "games" in the EVE universe to a personal suspicion of an "end game" for SOMER Blink similar to past player-run sites which didn't turn out well for player investors.

Around 17 August 2014, SOMER Blink began advertising a new promotion. The basic framework of the promotion was that if a player purchased a PLEX from one of SOMER Blink's affiliates (paying real-world money for the PLEX), then SOMER Blink would repurchase that same PLEX from the player (paying ISK for the PLEX). The promotion is bundled, and creates a constant purchasing loop.

At this point, the facts become muddy. Some claim SOMER Blink received cash from the affiliate as part of the transaction. Some believe SOMER Blink paid inflated ISK prices as a means to undercut other authorized PLEX resellers. Some assert this was simply a value-added service, allowing players to redeem their PLEX without having to go through the steps of personally selling it on the in-game market. In response to the appearance of impropriety in the promotion, the EVE Community team helped lead an immediate investigation.

Our investigation uncovered a number of concerns. For privacy and other reasons, we will not discuss them all. However, we want to comment on three key issues.

First, the promotion could be applied to facilitate the exchange of real-world money for ISK (it's indirect, but such transactions usually are). If the promotion were used in this manner, it would be a violation of EVE Online's EULA and Terms of Service. We will not comment on whether any such violation actually occurred. However, this potential did raise a red flag.

Second, SOMER Blink advertised the promotion as being "approved by CCP." But SOMER Blink never had permission from CCP to make such a statement, which misled our players, and is no different than someone pretending to be an authorized representative of CCP (look at paragraph 8 of our Terms of Service). This is a serious violation because it undermines the safety and security of EVE.

CCP was involved in discussions with SOMER Blink to address our concerns about their products, which included several different ideas for promotions, but none of them had been fully authorized by a CCP representative (notably the legal department). The promotion in question was similar to one SOMER Blink had suggested (the "PLEX Buyer's Club"), but the promotion had been altered before enacted. SOMER Blink certainly had no basis to assert the live promotion was "approved by CCP."

Finally, following our investigation, CCP tried to resolve our concerns directly with SOMER Blink's founder. In response, the founder published private communications from CCP without authorization. This violates our EULA and Terms of Service (see paragraph 18 of our Terms of Service).

We cherish and protect the freedom of our players and the creative ways people interact in EVE. But we also have an obligation to make the game environment safe and secure for everyone.

We believe the actions of SOMER Blink overstepped the bounds of fair play.

After careful consideration and consultation with CSM9, who have displayed an outstanding level of support in assisting with this issue, CCP has taken the decision to permanently ban the founder of SOMER Blink from EVE Online across all accounts, with immediate effect. This is due to multiple violations of our EULA and Terms of Service.

Following the promotion, CCP no longer regards SOMER Blink as a fair or legitimate service within the EVE Community. We are unable to provide reimbursements as per section 1.3 of our reimbursement policy, so it's good to see that SOMER Blink is shutting down in a controlled and stable manner, and that players will be able to withdraw their ISK and / or assets.
While we will be monitoring this closely, we have no intention of interfering with the process, as we feel that allowing players to be able to have their assets and/or ISK returned by SOMER Blink will is an important part of bringing this situation to a solid resolution.

Our actions are not intended to restrict creativity. Rather, we want to ensure that EVE player organizations do not leverage unfair advantage outside of the normal bounds of acceptable gameplay and do not have a detrimental effect on the health of our community, the game environment, or the relationship we have built with our players over the last 11 years. CCP sincerely hopes that players won't take this incident as a sign we want to start micromanaging any of the amazing player services who have operated for days or months or years without breaching the EULA or ToS.

We remain committed to ensuring the playing field remains level, fair, and even for every player. We want you to enjoy EVE for a long time to come – without the risk of misleading or unfair gameplay.

On behalf of CCP Games

In this article: ccp, ccp-games, community, culture, eve, eve-online, game-community, internet-spaceships, news, news-items, sandbox, sci-fi, shutdown, shutdowns, somer-blink, spreadsheets-online
All products recommended by Engadget are selected by our editorial team, independent of our parent company. Some of our stories include affiliate links. If you buy something through one of these links, we may earn an affiliate commission.