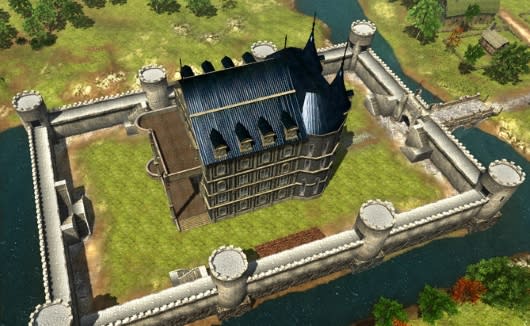 Do you ever look at your wallet and say, "Ugh, this thing is too full! It's causing a bruise on my tushie every time I sit, and no gas station ever has change for a thousand-dollar bill!" Are you tired of the endless cycle of purchasing luxury sedans to roll them off cliffs only to realize that the auto industry is making them faster than they can be destroyed?

We here at Massively feel your pain, and just as soon as I finished eating a breakfast of scrambled eggs made from endangered birds, I hopped off the company's gold yacht and got to work tracking down ways that you could relieve yourself of the burden of wealth.

So here is my plan, in 10 simple steps, for you to shed $46,750 of your bank account, all by blowing your enormous disposable income on Kickstarter and other crowdfunding options. No, please don't thank me by sending me a gigantic check. I would only shred it to use in my robo-hamster's cage.

While it's quite unfortunate that the $15,000 package is "out of stock" (darn the limited storage capacity for bytes!), there is a $10 grand deal that could alleviate a bit of your suffering. It comes with five -- count 'em, five -- imaginary spaceships, a USB drive, a day with Chris Roberts (whoever that is), and some other epeen-worthy goods. If you're going to the stars, don't cheap out on it -- that's what I always say!

In addition to so many supporter credits that you will be able to float your own navy on top of them and call yourself "Admiral Pretend Money," you'll get the opportunity to design a biome with the dev team. And if you're not using that opportunity to go totally juvenile and make a poo world or an alpaca death zone, then you have just wasted that $2,500 the wrong way.

First of all, you're buying a package deal that sounds like the sequel to an awesomely bad TV movie. Second, you'll be moving into a virtual house so big that it has its own gravitational pull. Good luck on finding enough decorations to make it seem like something more than an empty tomb. And finally, you'll be invited for a pow-wow at Richard Garriott's (whoever that is) home. When you arrive, I assume Garriott will hand you $11,000 of your money back with a sheepish apology.

Owning a tavern is a dream that many of us billionaires have, but how many take the time out of our busy schedule of playing life-sized chess with the serving staff to do so? At least for a paltry five grand, we can set up shop in a virtual pub and get virtual people virtually drunk. That should do for entertainment until the life-sized Mouse Trap game is set up.

Sure, for the same price you could get a (yawn) flight to go have dinner with the CEO, but for my money I'd rather be able to "invent an endgame victory scenario." I don't know much about this game, but I can already tell you that this victory scenario would involve Henry Kissinger, seven key lime pies, and the entire newly orphaned Star Wars extended universe.

Yes, you get to design a new mission. But what's better than that is that you and five friends (or country club associates) get a whole extra day of head start access that nobody else gets! Imagine! An entire 24 hours all to yourself in an online world! It's just enough time to carve dirty words all over the landscape and litter up towns good.

It's hard to pinpoint which perk of this package will impress your exotic animal safari buddies more: the official thank-you from the devs or the fact that your name will be included in the game's credits. Both perks combined are enough to get you out of jail if you have another "whoopsie" involving your rifle and that busload of tourists.

As we all know so very well, money buys the crown and money keeps it there. Oh, will those silly peasants ever learn to stop revolting at their clear superiors? Now that you can not only buy yourself into royalty but get your own island on which to rule, it won't matter what they think. Huzzah!

Mirrors. They're so... common. Now, paying a paltry $1,500 to send in a photo so that some underpaid developer in sweatpants can digitally insert your mug onto an NPC is the only way to admire your own reflection! Admire that digital sneer and haughty laugh. Oh you, you're so beautiful!

Justin "Syp" Olivetti enjoys counting up to ten, a feat that he considers the apex of his career. If you'd like to learn how to count as well, check out The Perfect Ten. You can contact him via email at justin@massively.com or through his gaming blog, Bio Break.
In this article: avalon-lords, camelot-unchained, crowdfunding, featured, greed-monger, humor, neos-land, opinion, p10, pathfinder-online, perfect-10, perfect-ten, roundup, shroud-of-the-avatar, star-citizen, the-perfect-10, the-perfect-ten, the-repopulation, top-10, top-10-list, top-ten, top-ten-list, trials-of-ascension, trove
All products recommended by Engadget are selected by our editorial team, independent of our parent company. Some of our stories include affiliate links. If you buy something through one of these links, we may earn an affiliate commission.