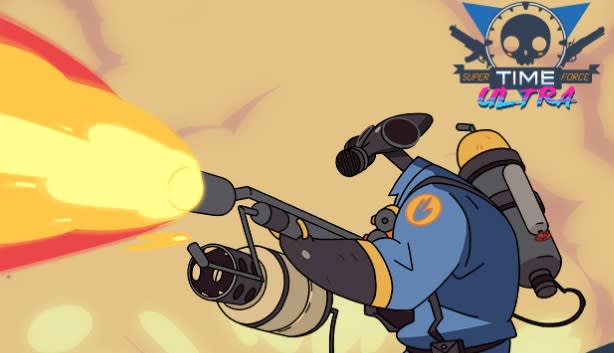 Capybara Games has turned the proverbial Valve, and now three characters drawn from Left 4 Dead and Team Fortress 2 are pouring forth into the upcoming game, Super Time Force Ultra. Zoey from L4D uses twin pistols and propane tanks to destroy her foes, while the Pyro and Saxton Hale - both from TF2 - roast baddies with a flamethrower and punch them into oblivion, respectively.

STFU (get it?) is an updated version of Capy's Super Time Force, which released earlier this year for Xbox 360 and Xbox One. We thought it was quite good, though not without flaws. Ultra adds not only the new characters mentioned above, but a new Ultra Force power mode and 50 Helladeck challenge levels.

STFU will complete its journey through time and space and arrive on Steam on August 25.
[Image: Capy Games]
In this article: Capy, capybara-games, left-4-dead, pc, pyro, saxton-hale, super-time-force, super-time-force-ultra, team-fortress-2, zoey
All products recommended by Engadget are selected by our editorial team, independent of our parent company. Some of our stories include affiliate links. If you buy something through one of these links, we may earn an affiliate commission.