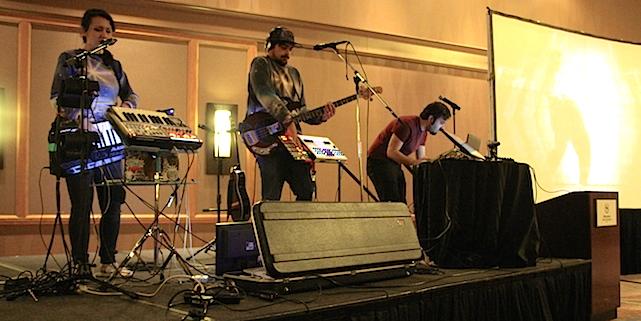 Denver has been a host city for the 360|iDev conference for a number of years, and this year's event for developers is currently underway in the Mile High City. TUAW is at the conference to see what the best brains in iOS development are up to. Although there were some conference sessions yesterday, the event started in earnest today, and it launched with a bang with a keynote address that was definitely out of the ordinary.

Surya Buchwald took the stage this morning for the opening keynote, and in case that name isn't ringing a bell, perhaps you know him better as Momo the Monster, VJ for deadmau5, the Glitch Mob, and Wolfgang Gartner. He's the director of innovation for Helios Interactive, creating immersive experiences for events and retail outlets.

So what does this have to do with iOS development? Buchwald's keynote was ostensibly a talk about the creation of a generative art performance app, but quickly transformed into an amazing performance by Colorado-based art/music duo Polar Vortex. Buchwald has several fun visualization apps in the App Store that were demonstrated during the keynote and performance: MakeSpaceShip (US$0.99) and FiddlyBits (Free). This year's conference is being attended by 380 developers and app business types, most of whom were at the keynote this morning. As you'd also expect at a conference full of nerds, every name badge is equipped with an iBeacon that works with the official conference app. Want to know who's in a session with you? Just fire up the app and you get a full rundown on everybody in the room... or at least it's supposed to happen that way when the feature gets turned on. Let's just say the iBeacon functionality appears to be in currently in development, as it should be for a developer conference.

In this article: 360idev, developer, events, music, surya buchwald
All products recommended by Engadget are selected by our editorial team, independent of our parent company. Some of our stories include affiliate links. If you buy something through one of these links, we may earn an affiliate commission.